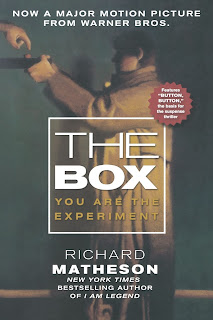 The Box: Uncanny Stories by Richard Matheson
My rating: 1 of 5 stars

The title story in this collection is by far the most interesting and is the story to which I will devote the focus of this review.
To those who know anything about Sartre’s philosophy knows that Sartre proffered that as we mature, it becomes evident that we are simply hiding behind various “masks” as a kind of cloak to escape the radical freedom we are condemned to. The box in this story, as in sartres most famous play No Exit, is a room that exposes us as to who we really are, no more hiding.
The box allowed Norma to see a future that she hadn't seen before. It made her see her current happiness as somehow lacking, incomplete. And much like Eve in the garden of Eden, after having been tempted with a better future, she partook of the fruit and condemned them both.
The final question in the end is can we ever really know someone? But the answer to that question is obvious. A better question is since the prohibition against any transgression generates the very desire to transgress it, are we in fact fated to always push the button?