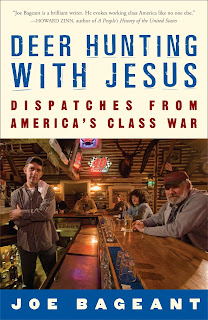 Deer Hunting with Jesus: Dispatches from America's Class War by Joe Bageant
My rating: 5 of 5 stars

The American working class is dead and we are headed toward corporate feudalism.
The elite are going to keep freezing us dry, giving us just enough to live on and no more. We are very much seeing a real and serious struggle between those who have and are trying to get more and those who have not and are likely to get even less.
But I reserve my deepest scorn, and my greatest resentment, for the social forces that oppress millions of the working poor — chief among these is the woeful standard of education in rural America, which I believe, as does the author, is a purposeful strategy of the middle and upper business classes, which is one of the most efficient and cost effective ways to keep the lower classes low.
The class war is fought cold - with words, reproaches, snubs and deliberate mishearings - between mostly urban liberals and largely rural conservatives, who snipe at each other from class-segregated homes, bars and schools and while it may be true that working class poor people primarily vote against their own self-interests, they do so only by default, the reason being is because the left refuses to embrace them and at every turn they only wish to openly mock and blame them for all of societies ills. And if this causes some people to turn to an easy and self-destructive alternative, be it conservative politics or opioid painkillers, it isn’t because they lack the intelligence or strength of character to improve their own lot. It’s because false promises and cheap drugs are the only things the rest of America exports to Appalachia in plentiful supply.
I defy anyone to read this book and go right on satirizing rednecks, white trash, or Republican-voting working class people in quite the same way as they did before.