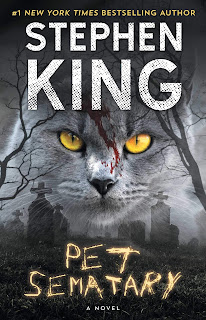 Pet Sematary by Stephen King
My rating: 5 of 5 stars

This book is about the very human inability to accept that death is forever.
But its not about death itself. Its about the fear that replaces the fear of death, and that fear is the fear of the return of the dead. Such a replacement is obviously a defense mechanism, which is probably why King's novel is so popular and why the ideas that form the basis for this novel are so persistent in folk and popular culture. Death is an issue the American family and society will not face, at least not head on.
At its heart is an idea that we all secretly feel is true: our safety is an illusion. No matter how warm and safe the Creed family home feels, it can be invaded at any moment by death. Louis sentimentalizes death as a natural part of life, but when it suddenly reaches out and claims his daughter’s cat, his son, and his wife, his first reaction is to fight it at all costs. His being at peace with death was a lie, and so was his sense of safety. In fact, the Creed family is built on lies. Rachel has kept the death of her terminally ill sister, Zelda, a secret for years because it traumatized her too deeply and now she and her parents pretend her sister never existed, convinced that this shameful secret will destroy their family if it’s talked about. Louis, for his part, has kept secret his father-in-law’s attempt to bribe him not to marry Rachel. Their family unit only feels safe and secure as long as they keep these secrets from one another. As long as they don’t think about the Micmac burial ground behind their house. As long as they don’t think about death.
This book tells us that a secure identity, one that’s stable and reliable, usually turns out to be a lie that we believe in because it’s convenient, not because it’s an immutable fact.
King’s point in this story is that there are older forces out there, forces that come with the territory, and they’re right beneath the surface, waiting to claim us when they’re ready.
Therefore, it’s not horror that is the act of imagination but our reality—family, home, economic security—that is imaginary. These things exist purely as an act of faith, we believe in them against the evidence of our senses. Because if we don’t then we look down and see that there’s nothing to keep us from falling screaming into the void.