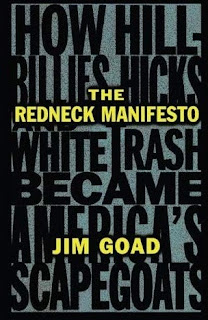 The Redneck Manifesto: How Hillbillies, Hicks, and White Trash Became America's Scapegoats by Jim Goad
My rating: 5 of 5 stars

Nothing like working a minimum wage job to really stoke your class hatred.
The term "hillbilly" allows middle class urban people to feel better about the system of money and power that has them in its grasp, "someone is always beneath us lending proof that the twig on which we stand is really the rung of a ladder leading upward to something we must defend with our lives."
The middle class is educated enough to be able to think for themselves but comfortable enough to be highly susceptible to propaganda. The middle class is the most important but also the most dangerous section of society. The middle class is indoctrinated into a system that will exploit them to become the oppressors of the lower classes, an invisible violence and Americans are to myopic to realize how much class really matters. No matter how much anyone protests to the contrary.
"It's been said that racism is Americas dirty little secret, if so America has done a terrible job at keeping that secret. Classism however, remains a largely unscratched pimple on our nations swinish ass."
Being white trash isn't something to be ashamed of, it's something to be mad about.