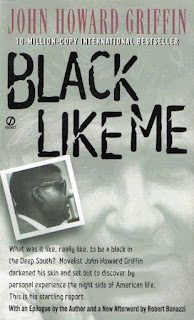 Black Like Me by John Howard Griffin
My rating: 3 of 5 stars

Black Like Me is a well-intentioned book but also a hopelessly anachronistic one.
Today the idea of a white man darkening his skin to speak on behalf of black people might appear patronising, offensive and even a little comical. You really expect me to believe that no one noticed that he was just a 39 year old white man with oddly dark skin?
I am astonished that this book is often described as a great piece of anthropology and I strongly suspect that at least part of Griffin's story is phony. There are too many miracles, too many gaps, too many unexplained coincidences, and too many places where sentiment is used where facts would have been more helpful.
I'm also not convinced that every instance of racism he describes can actually be ascribed to racism. Taking on a "black" persona, he was seeing things through the prism of color and I think it was distorting his perceptions of reality, so much so that every instance of rudeness is ascribed to racism first, without ever considering the fact that maybe the other person is just an asshole. He also never once questions the conception of his project, and fails to confront the possibility that maybe casting yourself as a "white savior" would be inherently racist in and of itself.
Nevertheless, in a world with no heroes, we need to take what we can get.