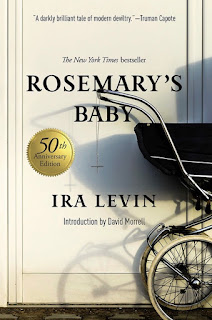 Rosemary's Baby by Ira Levin
My rating: 5 of 5 stars

Rosemary’s Baby is a meditation on the social power dynamics embedded in our culture. It is a novel not only about the treatment of women at the hands of a powerful Patriarchy, but also an account of the price exacted on the young by the elderly in return for the transferal of power to members of a new generation.
As a young couple, Guy and Rosemary have no power and, relative to Guy, Rosemary has even less power. She doesnt even have power over her own sexual and reproductive drives. But Guy uses his youth and his access to Rosemary to broker a deal with the Satanists, or power brokers, and in the novels final scene, Rosemary does the same. This is the same deal that is offered to all of us at one point or another in our lives. You can be independent or you can have access to the money and power accumulated by previous generations.
Idealism gives way to compromise as it inevitably must.
Rosemary’s Baby is about making a deal with the devil in the most generic sense of the phrase, but what its really about is the compromises we make and the values we ignore in order to make our ways in the world.