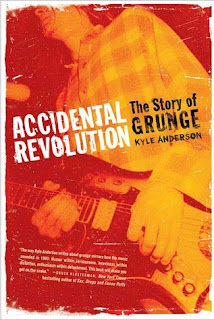 Accidental Revolution: The Story of Grunge by Kyle Anderson
My rating: 5 of 5 stars

How long does it take for the present to become history?
For the political theorist Francis Fukuyama, history ended in 1989 – for him all the big questions had all been answered, and the ‘90s were the first decade of a final era of democratic capitalism. By the start of the 21st Century, of course, Fukuyama’s thesis was brutally discredited, and endless crisis has brought history roaring back to life yet again. But if we cannot speak of an end of history we can perhaps speak of an end of culture?
Having realized that they couldn’t or didn’t want to achieve the cookie-cutter suburban success story that was promised in their youth, Gen X’ers embraced the outsider mentality and ushered in the idea that it was cool to be uncool. And we, Millennials, as all impatient pre-teens have done since the dawn of time, adopted the popular culture of the group right ahead of us, so we became miniature Gen X posers. Now, we’re wise enough to grudgingly accept the fact that we were just the lame little siblings hanging out on the sidelines of the Gen X party, but we’ve never quite shaken the influence it had over us as impressionable adolescents.
The ‘90s may turn out to be much more than a point on a timeline, but the first decade of a much longer era of stasis because culturally the 90’s never died. As William Faulkner put it in another context, “The past isn’t dead; it’s not even past.”
Will grunge ever be less relevant? Probably so, but it's the last important music revolution that we've seen at this point.