Book Review: Hillbilly Elegy: A Memoir of a Family and Culture in Crisis 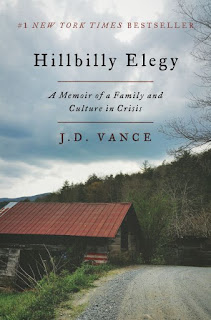 Hillbilly Elegy: A Memoir of a Family and Culture in Crisis by J.D. Vance
My rating: 5 of 5 stars

“Maybe the poor deserve their lot in life.” This old party line has always given those disinclined to part with their own money an excuse not to feel guilty about their own greed and self-interests. But honestly, where does the blame stop and sympathy begin?
The problem with living in constant economic insecurity is not a lack of thrift, its that people in these circumstances are always focused on the current crisis. They can't plan for the future because they have so much to deal with in the present. And the future seems so bleak that it feels futile to sacrifice for it.
Vance argues that hillbillies are only partially to blame for those circumstances. In the course of his journey from Middletown to the Marines to Yale, Vance finds that hillbilly pessimism is, in its toxicity, equalled only by the disdain that metropolitan people feel for those they call “rednecks” or “white trash.” Jim Goad said it best when he observed that, “Redneck is the racial slur liberals use for people they assume are always using racial slurs.” Adding, “I for one am sick of the upper and middle class hypocrisy that sheds tears for the black "struggle" while laughing at my white-trash roots. I have come to hate liberalism for the same reasons I hate religion, it lied to me.”
What liberal America loathes these days are poor and “poorish” people, especially the kind who look and sound like they might live in a trailer. They will of course swear on a stack of Lands' End catalogs that they are not bigots, but, human nature being what it is, we are all kicking someone else's dog around, whether we admit it or not.
Some of us make it out of poverty, that much we know to be true, but this doesn't prove that classism is dead. It just proves that some of us are lucky.