Book Review: The Metamorphosis and Other Stories 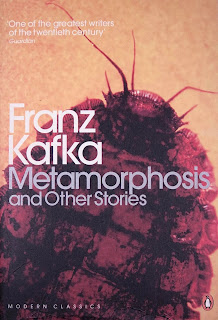 The Metamorphosis and Other Stories by Franz Kafka
My rating: 4 of 5 stars

Bureaucracy is our only real contact with the divine in our modern secular time. Bureaucracy in Kafka's works, rather than being representative of any particular legal or political entity, is usually interpreted to represent a collection of anonymous, incomprehensible forces. These are hidden from individuals but control their lives nevertheless in numerous ways. Individuals become innocent victims of systems beyond their control.
In his short story “The Metamorphosis” we are presented with a story perfectly encapsulating how bureaucracy operating within a capitalist society demands too much of its workers, which in turn causes them to lose their very humanity. Placed in that type of environment we become less and less human everyday, until, like Gregor, we became something else entirely.
In “The Judegment” the man from the country is an hysteric whose desire is obsessed by the secret behind the door, but there is nothing beyond the door. Kafka points out that the ultimate secret of the law is that it does not exist.
Part of Kafka’s genius was to eroticize bureaucracy itself. Bureaucracy in many of his stories came to embody what Lacan referred to as jouissance, which is that which we can never reach, attain, and that which we can never get rid of, which Kafka portrays perfectly in his nightmarish stories, as the quintessence of the whole human condition.