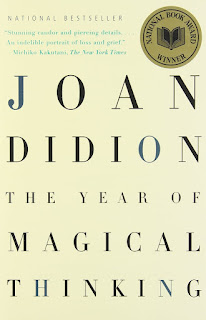 The Year of Magical Thinking by Joan Didion
My rating: 4 of 5 stars

The title of this book refers to magical thinking in the anthropological sense, thinking that if a person hopes for something hard enough or performs the right actions long enough that an unavoidable event can be averted. Didion reports many instances of her own magical thinking, particularly the story in which she cannot give away her husbands shoes, as he would need them when he returned.
Didion makes a distinction between grief, which is passive, and mourning, which like Mrs. Post's instructions is active.
I myself find the notion that one should simply move on with their lives after they have suffered through the loss of a loved one absurd, but it also appears as if it is inevitable. Time unfortunately does heal all wounds. So it becomes a constant battle to maintain the memory of the value of what you lost. Which is why mourning is active. Grief comes later and if your lucky, never at all.
When someone you love dies the immediate question posed becomes, which version of this person do I choose to remember, which memories do I overlook? We engage in this type of revisionism because we feel guilty at having hated them or not having loved them enough, we feel almost responsible for their deaths, guilty that we are still alive, at least for the moment.
But the idea of merely coping with the loss of someone you love is a horrifying idea. I wouldn’t want to get over it, I wouldn’t want to go on. I would want to feel the pain everyday from the moment I woke up until the moment I fell asleep. I would want to suffer. I would never want to forget what I had and lost. I would want to know that it was real. I would never want it to become like a dream. They were real once and I knew them. They won't be forgotten, at least by me. I would want to go mad with grief. They were once a human being, a person with feelings and memories, fears, loves and hopes and I will not just wipe that away with the notion that I should somehow move on with my life.
I will gladly suffer quietly. Maybe only because it would simply be easier to go insane rather than acknowledge the fact that they will never return. But it feels like something else entirely. As Didion herself says, “The apprehension that our life together will decreasingly be the center of my everyday seemed today on Lexington Avenue so distinct a betrayal that I lost all sense of oncoming traffic.” I myself steadfastly refuse to cast them into the void willingly and completely, at least as long as I am still alive and capable of doing otherwise.