Book Review: The Trouble with Being Born 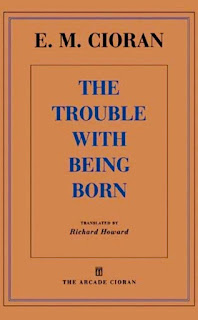 The Trouble with Being Born by Emil M. Cioran
My rating: 3 of 5 stars

Cioran is a writer who occupies that venerable space where philosophy and literature meet. He is a writer who delivers us from despair simply because he is so far removed from it.
“Only optimists kill themselves, he says, “optimists who no longer succeed at being optimists. The others, having no reason to live, why would they have any to die?” An apt question. It’s also where most critics of Cioran go wrong. Far from being a brooding pessimist, maybe he’s simply a veiled optimist.
“We dread the future only when we are not sure we can kill ourselves when we want to.”
Never have I felt more liberated than when considering this idea. It’s like what Cassius says in Julius Caesar, “But life, being weary of these worldly bars, never lacks power to dismiss itself.”
This book comes very close to what the Denial of Death tried to do, except here Cioran focuses on birth as opposed to death as the worst thing that can can happen to us.
Some people have called his ideas dangerous, but at the end of the day, if philosophy is not dangerous, what use do we have for it?
If we take nothing else from the work of Cioran, let it be that question, asked without presentiment.