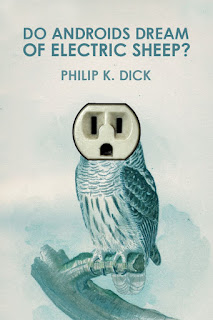 Do Androids Dream of Electric Sheep? by Philip K. Dick
My rating: 3 of 5 stars

This book symbolizes the idea of what's known in philosophy as the problem of identity.
Lacan claimed that the formation and reassurance of the self depends on the construction of an Other through imagery, beginning with a double as seen in the mirror. The androids, perform a doubling function similar to the mirror image of the self, but they do this on a social, not individual, scale. Therefore, human anxiety about androids expresses uncertainty about human identity and society.
Identity is a fluid concept, shifting and changing depending on ones environment and any attempt to apply the concept of identity to persons leads to a paradox. The most natural explanation of this is that the concept is unsuited to persons, that it cannot be legitimately applied to them, so a person is not the sort of thing that has an identity in space or through time.
The sense of self is itself an evolutionary artifact, which saved time in the circumstances it evolved for. But the sense of self breaks down when considering some events such as memory loss, split personality disorder, brain damage, brainwashing, and various thought experiments.
We simply do not exist.
But there is also this notion of empathy as being the defining feature of humanity that runs throughout the course of this narrative that I found interesting.
Empathy is what makes us human, and is the crux on which the authors metaphysical reflection on the meaning of life hangs. Each character in the novel must deal with what it means to be empathetic and whether that allows someone to be valued as a living thing. Conversely, this also means that the less empathetic one is, the less human they become.