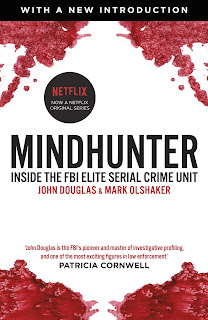 Mindhunter: Inside the FBI's Elite Serial Crime Unit by John E. Douglas
My rating: 5 of 5 stars

The human race has a long history of hurting the ones we love, and one of the first questions anyone asks upon hearing about some of the most heinous crimes such as the ones John Douglas has had to deal with throughout most of his tenure is, “What kind of person could have done such a thing?” As painful as the answer to that question might sometimes be, the answer is any one of us.
“Crime,” the author says, “is a moral problem.” And I guess maybe it is. And the solution he recommends, combined with his experience, is love. Perhaps this sounds a little too simplistic, but it also gets right to the heart of a lot of these issues.
As much as this book is a memoir of a career in law enforcement it’s also a memoir of American culture. America being the serial killer capital of the world. There are numerous speculative reasons for the large number of American serial killers and this book serves as an extension to those reasons highlighting societies larger problems.
Durkheim said that criminality was a response to larger societal issues, in other words if there is something wrong within our society crime is a response to that. Durkheim’s theory is that since crime is found in all societies, it must be performing necessary functions otherwise it would disappear in an advanced society.
Kevin Haggerty, a professor of sociology and criminology, has examined the cultural and historical context of serial killing and found that, “serial killing is a distinctly modern phenomenon one that is intimately tied to a broader social and historical setting which includes the rise of a society of strangers, the development of mass media, and cultural frameworks of denigration and marginalisation.”
“In antiquity killing sequentially may have been something that someone did, today a serial killer is something someone can be.”
But why are we so fascinated with the people who commit these sensational crimes?
David Schmid, cultural studies professor, has a theory about why people find serial killers so entertaining, “People both fear and admire criminals, he says, because they live outside the bounds of laws and social conventions.” In other words they walk the places in our minds that we are afraid to go.
True-crime narratives represent the human condition writ large: ordinary people operating at the terrifying extremes of those instincts and emotions. In this vein, every case becomes its own morality play, complete with heroes, villains, and victims. And we must never forget about the victims, lest they become a footnote in someone else’s history.