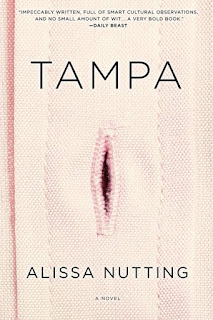 Tampa by Alissa Nutting
My rating: 5 of 5 stars

There is very little true innocence left in the world. And what little there is Celeste Price has sexualized it.
How much less disturbing we find relationships between grown women and young boys than those between men and underage girls. Our culture sends a message to men that any time you have the option to have sex with an attractive woman, you have to take it. But for women, you always have to “guard yourself against it.”
Christopher Anderson, the executive director of the New York organization MaleSurvivor, said, “Any time a boy has a sexual interaction with a woman it cannot be talked about as though it was a negative thing without the man sacrificing his masculinity, especially amongst his peer group.” Maggie Shipstead, writing in the New Republic, said, “Tampa' is a product of the double standard it criticizes: with the genders reversed but the raunchy content preserved, 'Tampa' would never have been published — at least not by HarperCollins.”
This is a book about insatiable perversion rooted in a fear of death. Thats all sex is really. An attempt to avoid the inevitable.
But there is also something we find rather fearful about female sexuality.
Toward the end of the book as Celeste is meeting with her soon to be ex husband for the last time she says this, “At this point his eyes moved down to my clasped hands. He seemed to be anxiously waiting for me to remove them, like my vagina was a mouth ready to confess to all sorts of atrocities and I was merely gripping it shut in order to silence it’s cries.”
This idea of the vagina as being a mouth isn’t a new one, and this passage perfectly encapsulates the "vagina dentata" fears found in most cultures throughout the world. These myths expressed the threat that sexual intercourse posed for men who, although entering triumphantly, always leave diminished. In her book Sexual Personae, Camille Paglia wrote: "The toothed vagina is no sexist hallucination: every penis is made less in every vagina, just as mankind, male and female, is devoured by mother nature." The female vagina can even be seen as an abyss out of which all human life emerges from the powerful nowhere of our mothers bodies.
In an article for Alternet about the inherent ambiguities that female sexuality has posed for men throughout millennia, Eric Berkowitz wrote, “In primitive societies, men regarded women with the same dread they felt toward the natural world. Early humankind was at perennial war with nature, the forces of which were lethal as well as incomprehensible. The core of the natural world was the female womb, from which newborn human life emerged in a gush of blood.”
Sex brings us into contact with oblivion. Which brings us back to the idea of sex and death as being intimately intertwined.
Slavoj Zizek, Slovenian philosopher, has suggested that desire is always focused on loss and thus has an intimate relationship with Freud’s idea of the death drive. “Death drive is not the kind of Buddhist striving for annihilation people mistakenly believe. No. Death drive is almost the opposite. Death drive is the dimension of the undead, of living dead, of something which remains alive even after it is dead. And it’s, in a way, immortal in its deadness itself. It goes on, insists. You can not destroy it. The more you cut it, the more it insists, it goes on.” Which also plays into the male dread of female sexuality as being insatiable.
But this is also a book about how beauty can be a kind of mask that hides the worst kind of evil and about how maybe it’s time we stop believing the myth about how all women are the nurturing sex from which comes all civilized behavior.