Book Review: Story of the Eye 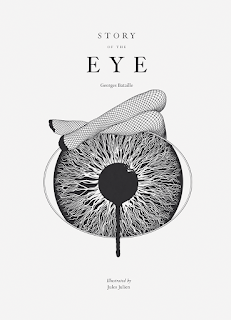 Story of the Eye by Georges Bataille
My rating: 5 of 5 stars

The question of how to approach this novella is a difficult one. It’s an erotic surrealist book by an unhappy Frenchman, yes, but it’s also the story of an object and what that object represents.
I was drawn to the image of the egg in this story, mostly because of what the image of the egg represents within this context. The Eye, through a certain number of substitute objects, i.e. eggs, comes to symbolize false birth, in other words the impossibility of life.
Nothing is real. But it’s a truth that’s also a lie, because ultimately there is no truth. But if there is no truth then the statement I just made has involved me in a contradiction, hence our problem. Bataille says “I believe that truth has only one face: that of a violent contradiction.” What an apt description of what it means to be alive, a “violent contradiction.” But the symbol for us becomes an abstraction, too avant-garde. The main focus should be on human sexual activity itself.
Bataille has a way of describing the inability to achieve real satisfaction or fully satiate desire even after a climax is achieved. Sex for him is a series of profane and sacred acts, bodies devoid of purpose beyond the violence of movement, the slap and tickle of separating and colliding, sex as a sublime sort of personalized violence. Violence itself is sex with no happy ending.
Human sexuality is a highly questionable phenomena, and belongs, at least potentially, among the extreme rather than ordinary experiences of humanity. Sex is an extreme experience but sex is also frightening, indulgent, melancholy and scandalous. It’s frequently expressed as an assertion of power or a willingness to cede our bodies to the powerful and from the heights of ecstasy we often fall into the trenches of despair.
Reading this book was very much like having a sexual experience. One where we begin in lust and then ultimately end in shame.
But eroticism also orients us toward death. As the narrator says, “death was the sole outcome of my erection, and if Simone and I were killed, then the universe of our unbearable personal vision was certain to be replaced by the pure stars, fully unrelated to any external gazes and realizing in a cold state, without human delays or detours, something that strikes me as the goal of my sexual licentiousness: a geometric incandescence (among other things, the coinciding point of life and death, being and nothingness), perfectly fulgurating.” This association with death is also what makes it so desirable, terrifying and enjoyable. But unlimited freedom, sexual freedom in the case of this novella, ceases to make sex special.
Roland Barthes, in his essay, “The Metaphor of the Eye,” said, “Eroticism is not an object of enquiry, simply because the erotic is precisely that ‘sacred’ materiality which abrades and ruptures the categories of subject and object, self and world, inside and outside, human and animal. Unlike Hegelian reflections upon the logical constitution of the limit, Bataille is primarily concerned with the somatic limits of experience and theorizations thereof. It is not our habits or their disruptions which make us human, Bataille contends, for animals seem to exhibit as much: “animal sexuality does make for disequilibrium and this disequilibrium is a threat to life, but the animal does not know that [...] Eroticism is the sexual activity of man to the extent that it differs from the sexual activity of animals. Human sexual activity is not necessarily erotic but erotic it is whenever it is not rudimentary and purely animal…”
This book can also be said to embody the injunction to enjoy ourselves as somehow becoming a barrier to enjoyment itself.
It breaks all social boundaries not as a way to free the individual but as a way to show us that those boundaries are what make us human, that those boundaries are there for a reason perhaps and that human sexuality can’t be bound by conventions.
What Bataille really does is help us navigate the moral and socially polite barricades that are foisted upon us and allows us to deal frankly with how sex expresses itself in our imaginations.
This novella is not exactly a deep work. Everything it is is on the surface. The metaphor is laid out in its entirety with no secret reference behind it, but bizarre books like this one, take me to places I would not ordinarily see and anybody interested in the darker side of the arts, social sciences and humanities, or who is interested in destruction in any of its forms should take a look at this strange, yet interesting, little book.