Book Review: We Were Eight Years in Power: An American Tragedy 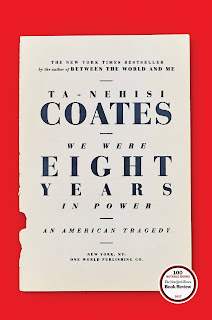 We Were Eight Years in Power: An American Tragedy by Ta-Nehisi Coates
My rating: 2 of 5 stars

It’s been said by more liberal pundits that this is a book you should read and ponder, but after having read it there doesn’t seem to be much here to really ponder.
Journalist Steve Sailer had this to say about the author, “The secret behind Coates’ appeal to white liberals is that he’s not very smart. He’s not likely to bring up awkward facts that don’t fit The Narrative. Why not? Because he can’t remember them. Paradoxically, Coates’ forgetfulness has convinced many of his fans that he is an authoritative historian. We live in an age of increasing antiquarianism in which the more historically remote the alleged cause, the more plausible it sounds to moderns. Coates’ inability to recollect much about recent decades provides his politically correct interpretations of the distant past with an infectious confidence. He’s the left’s Glenn Beck.”
Cornel West writing in The Guardian said of Coates, “He rightly highlights the vicious legacy of white supremacy – past and present. He sees it everywhere and ever reminds us of its plundering effects. Unfortunately, he hardly keeps track of our fightback, and never connects this ugly legacy to the predatory capitalist practices, imperial policies (of war, occupation, detention, assassination) or the black elite’s refusal to confront poverty, patriarchy or transphobia. In short, Coates fetishizes white supremacy. He makes it almighty, magical and unremovable.” Adding, “There is no doubt that the marketing of Coates – like the marketing of anyone – warrants suspicion.”
Coates mentions larger societal racism as being somehow endemic to our society and culture and he does this by quoting studies and statistics as if that should be the end of the discussion. But data without interpretation is useless. If a group of people are statistically represented as being discriminated against we need to know why that is and not just assume that the numbers tell the whole story and we certainly shouldn’t assume that the disparity is solely due to racism. Show me a policy or institution that is racist in its intent and I’ll agree, but Coates seems to want to conflate whiteness with wrongness at every turn.
Thomas Chatterton Williams, author of Losing My Cool, said, “What ostensibly anti-racist thinkers like Mr. Coates have lost sight of, is the fact that so long as we fetishize race, we ensure that we will never be rid of the hierarchies it imposes.”
Ta-Nehisi Coates has become a figure far too frequently interviewed and listened to and these eight essays, originally published in The Atlantic, have ultimately failed to enlighten in any meaningful way.