Book Review: Better Never to Have Been: The Harm of Coming into Existence 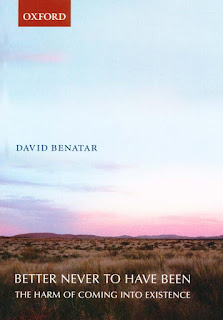 Better Never to Have Been: The Harm of Coming into Existence by David Benatar
My rating: 2 of 5 stars

What moral obligations could we possibly have to people who do not yet exist?
David Benatar seems to think a lot. But I myself don’t find his moral arguments against procreation very compelling. His arguments are too utilitarian. His solutions only solve problems by way of eliminating the people who the problems are for. It’s a philosophy that sets out to solve a problem and ends with the destruction of the world as the solution. I guess technically we could “cure” cancer by killing the patient, but that’s hardly the solution anyone is looking for.
I may disagree with his arguments but I do however agree with his conclusions.
I find the fact that life is ultimately meaningless a much more compelling reason against procreation. It’s like what Rustin Cohle says in the HBO show True Detective, “I think human consciousness, is a tragic misstep in evolution. We became too self-aware, nature created an aspect of nature separate from itself, we are creatures that should not exist by natural law. We are things that labor under the illusion of having a self; an accretion of sensory, experience and feeling, programmed with total assurance that we are each somebody, when in fact everybody is nobody.”
The knee-jerk response to an observation like this is, “If life is so bad, why don’t you just kill yourself?” Benatar devotes a forty-three-page chapter to proving that death only exacerbates our problems. “Life is bad, but so is death,” he concludes. “Of course, life is not bad in every way. Neither is death bad in every way. However, both life and death are, in crucial respects, awful. Together, they constitute an existential vise—the wretched grip that enforces our predicament.”
Unpleasantness and suffering are too deeply written into the structure of sentient life to ever be eliminated. We are asked to accept what is unacceptable. It’s unacceptable that people, and other beings, have to go through what they go through, and there’s almost nothing that they can do about it and more importantly there is no point to any of it. No grand narrative. Nothing. Just one long night of sorrow.