Book Review: Confessions of a Mask 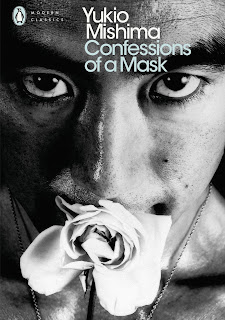 Confessions of a Mask by Yukio Mishima
My rating: 2 of 5 stars

Behind the mask of beauty lies death. Beauty is a thing that overpowers and conquers and ultimately destroys.
Dostoyevsky, In The Brothers Karamazov, said that, “Beauty is a terrible and awful thing. The dreadful thing is that beauty is not only terrifying but also mysterious. God and the Devil are fighting there, and their battlefield is the heart of man.”
And so begins this psychodrama about the conflicting aspects of the self.
This novel mirrors, as most novels inevitably must, the political context of its time through exposing the difficulties the protagonist faces in creating a viable identity that is in line with a politically promoted idea of masculinity.
But Kochan’s ‘mask’ is the paradigm of masculinity itself. His failure, and indeed the failure of every man, is a failure to maintain this performance and our punishment for this non-concordance is a lifetime of masochistic submission to societal norms and dictates to which are not our own.
But we all wear a mask.
Oscar Wilde said, “Man is least himself when he talks in his own person. Give him a mask, and he will tell you the truth.” But with Mishima it’s the inverse, ‘Give a man a mask and he’ll tell you a lie.’
So the question then becomes is there even a stable “truth” about the person wearing the mask to reveal?
Separating the life of the writer from his work is not always an easy one as is often the case with fiction. A novelist might be able to explore the negative emotions, vulnerabilities and flaws of fictional people while all the while expending enormous social energy in hiding his own weaknesses from those who surround him in life.
“Confessions of a Mask" is a highly autobiographical piece of writing. When you read the books of nonfiction which have been written about Yukio Mishima's life, both as a writer and as an individual, many of the events in "Confessions of a Mask" can be discerned very easily.
But “Confessions of a Mask" is more than just another autobiographical novel. Many of the ingredients of Mishima's later novels have their origins in this book. Violence, sexuality, a romantic longing for death at an early age are all present in this novel.
Mishima himself, in a failed coup attempt, ended his own life by committing ritualistic seppuku. His biographer and translator, John Nathan, suggests that the coup attempt was only a pretext for the ritual suicide of which Mishima had long dreamed and his notions of making death meaningful continues to have a powerful draw on the imagination, as reflected by the novels protagonist, and the fear of an ignominious death will drive people to do eccentric things. Petrarch said it best when he said, “A good death does honor to a whole life.”
So Wilde’s statement, through an elaborate performance, becomes true. Sometimes when you are hidden is when you are the most revealed.