Book Review: Death: A History of Man's Obsessions and Fears 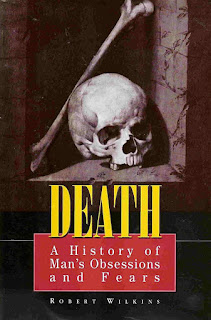 Death: A History of Man's Obsessions and Fears by Robert Wilkins
My rating: 5 of 5 stars

We can’t imagine our own deaths. Not really. We can’t really imagine what it’s like to be dead. And because of this failure of imagination death can seem to us like an impossibility.
If we can imagine a thing we can begin to gain some control over it, however illusory. This is how we become obsessed with death. It’s something we are psychologically disinclined to understand let alone imagine and the mind has a tendency to revisit things it doesn’t understand over and over again.
It’s been said that if we thought too much about death however that we would rush to embrace it. It’s like what Boswell asked in from The Life of Johnson, “But is not the fear of death natural to man?” To which Johnson replied, “So much so, sir, that the whole of life is but keeping away the thoughts of it.”
Death will forever remain as one of the most terrible things that can ever happen to anyone of us, also strangely enough perhaps one of the most meaningful. So great is this tragedy that we spend the majority of our lives trying to forget what it is that lies ahead of us.
Modern medicine has made death even more remote from our everyday experiences and yet perhaps for this very reason we remain acutely conscious of our own mortality, and the very idea of death still arouses feelings of enormous unease.
It is uncomfortable to think that we will not be alive one hundred years from now; it is even more disturbing to think that hardly anyone then alive will remember that we even existed at all. The lot of most of us is to be remembered by our grandchildren and be forgotten by our great-grandchildren.
But in the fashion of the times, our lives will be condensed into a name, a date of birth, a date of death, and a number for the cemetery staff to identify the site in their registers.
The conqueror worm always wins.