Book Review: The Witch And Other Tales Re-Told 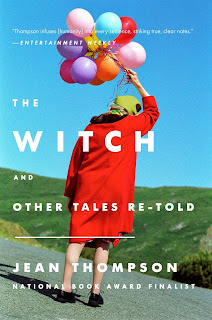 The Witch And Other Tales Re-Told by Jean Thompson
My rating: 3 of 5 stars

Fairy tales carry us back to a primordial kind of attention, the attention we gave the world when everything was “for the first time.”
We accept the irrational elements of fairy tales and its enchantments in the same way we acknowledge that parts of our minds are unconscious—unknown and unknowable to us—and yet very much there, extant, real, true, significant.
In a 2012 lecture, Jack Zipes said that fairy tales are examples of what he calls "childism.” He suggests that there are terrible aspects to the tales, which, among other things, have conditioned children to accept mistreatment and even abuse. Which may help explain my affinity for the title story and why it resonated so much with me.
As a boy I can remember numerous times when my brother and I were left alone in a parked car while our father was away ‘visiting’ a new house in some new neighborhood, always cycling back around by the end of the week however, and then coming out hours later and simply leaving. No explanation was ever given as to why we were there or what he was doing there or why we weren’t allowed in with him, although we speculated wildly at times as to the reason for our visits, much like Jo and Kerry, whose father neglects them daily by leaving them in the car alone for hours while he spends his days in a bar. Years later it was revealed he was simply going door to door trying to get pain medication to feed his addiction, an addiction he still struggles with today. It’s a wonder we survived our childhood at all now that I reflect on it.
According to the most reductive notion of how archetypes work, the stories in “The Witch” are what fairy tales are really about; they convert the tales’ figurative fancies into literal fact. “Candy” is really a warning of the perils that adult male sexuality poses for young girls. “The Curse” asserts the impossibility of protecting our children from the world’s dangers.
The psychologist Bruno Bettelheim, in his 1976 book “The Uses of Enchantment: The Meaning and Importance of Fairy Tales,” argued that the recurring motifs of the form, particularly the wicked stepmother, offer children a symbolic language with which to understand the confusing and sometimes frighteningly mercurial world of adult behavior: “Although Mother is most often the all-giving protector, she can change into the cruel stepmother if she is so evil as to deny the youngster something he wants.” In the fairy tale world, the dramas of the psyche are externalized and the contrasting sides of a single person become literally two different entities: loving Grandma and the predatory wolf dressed in her clothes.
The moralizing strain in the Victorian era however altered a lot of these classical fairy tales. Which ended up weakening their usefulness for both children and adults as ways of symbolically resolving issues.
In a quote from his childrens novella Coraline, Neil Gaiman said that, “Fairy tales are more than true: not because they tell us that dragons exist, but because they tell us that dragons can be beaten.”
People, children especially, need to know that no one is coming to save them, not their fathers, not the police, and certainly not their gods, and stories like these show them that the worst really is possible. It also shows them that occasionally the world can be made better, but it’s up to them to make it happen.