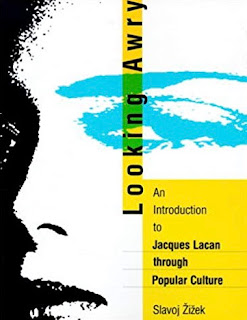 Looking Awry: An Introduction to Jacques Lacan through Popular Culture by Slavoj Žižek
My rating: 2 of 5 stars

For Lacan our unconscious is language itself.
The emergence of language opened up a hole in our reality, and this hole shifted the axis of our gaze, language redoubling “reality” back into itself.
Subjects can not communicate with one another (nor even themselves) directly, but only through the signifiers called ‘words’ in a language. Signifiers are neither fixed nor even fully understood by anyone, there is always hidden meaning behind what we say and how it’s said, therefore repression is required for us to assimilate the rules or orders constituting a language.
The subject itself is neither fixed nor transparent and language doesn’t represent the subject passively but turns around and structures the subject. In fact, the subject only comes to be with it’s initiation into language.
Zizek conceives the subject as something purely negative, a void or an emptiness of being (which Lacan refers to as the incomplete, divided, or “barred” subject of the unconscious).
The result of all of this is that communication is never clear or complete, selves are both brought together and separated by language and the subject is subject to demands that remain unfulfilled and desires that are rooted not in the individual but in the symbolic order of which it is a part.
Social reality then is nothing more than a fragile, symbolic cobweb that can at any moment be torn asunder by an intrusion of the real. The real being any traumatic event that shatters our coordinates, i.e. the part that is left over after symbolization, the part that resists symbolization altogether.
Zizek took Lacan’s ideas and applied them to the genealogy of culture and it is here that we should perhaps look for the basic premise of a Freudian theory of culture: all culture is ultimately nothing but a compromise formation, a reaction to some terrifying, radically inhuman dimension proper to the human condition itself. Culture is something we all believe in without realizing we believe in it. What is a cultural lifestyle, if not the fact that, although we don’t believe in Santa Claus, there is a Christmas tree in every house, and even in public places, every December?
Since our desires themselves are rooted in the symbolic order we can use Lacan’s ideas to interpret a text (movie, book, etc.) to see what it presents to us as objects of desire and since language and the symbolic order require repression, Lacan (Zizek) can offer us ways to discover just how the oppressive dynamics of our society actually work.