Book Review: Amarillo Slim in a World Full of Fat People: The Memoirs of the Greatest Gambler Who Ever Lived 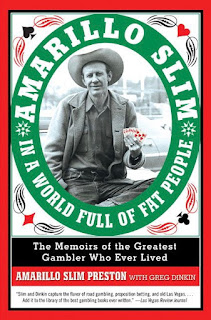 Amarillo Slim in a World Full of Fat People: The Memoirs of the Greatest Gambler Who Ever Lived by Amarillo Slim Preston
My rating: 4 of 5 stars

Legendary gambler Amarillo Slim, who captured the World Series of Poker in 1972 and who has evenhandedly snookered more money out of people than most of us could ever make in a lifetime, shares his tales of daring hustles, outrageous proposition bets, and near-death experiences with both humor and, oddly enough, humility.
This book itself is outrageously entertaining. Each story is more amazing than the next, and the only disappointment comes when the final page is turned. It’s written in a smooth, conversational style that perfectly captures the folksy tone of its subject and I would suspect that anyone with even a passing interest in one of the gambling world's most colorful characters would greatly enjoy it, I know I did.
As one might expect from a professional hustler, he’s particularly sharp when it comes to human psychology. As Slim puts it, “Gambling is a reflection of life. A man’s true character comes out when he’s sitting at the poker table - his strengths and weaknesses, his good traits and his faults. Whenever money is involved, you see the worst in people.”
I myself first heard about Amarillo Slim from the same place most people from my generation probably heard of him, from the 1998 movie Rounders starring Matt Damon, who’s character Mike McDermott quotes throughout the film, spouting such truisms as, “Play the players more than you play the cards.”
"When you put down a sports wager," Slim says, "it helps to know something other people don't know."
It's a principle he's put to use in creative ways. In the 1970s, for example, Slim challenged former Wimbledon champion Bobby Riggs to a high stakes game of pingpong, insisting only that he be allowed to choose the paddles. Riggs agreed — and was soundly beaten when Slim showed up with two cooking skillets (which the gambler had been secretly practicing with for months).
As Slim said, “It’s your job to triple-check the wording of any bet you make and to inspect the deck yourself, because if you don’t, your opponent has the right to take every angle he can.”
This, in a nutshell, seems to be his whole life’s philosophy and the message he wishes to impart to his readers: kindness and honesty are generally good business, but in the end, it’s get or get gotten and every man has got to look out for himself and his family first. Say what you will about this message, because the author isn’t so much proselytizing as reminiscing, but know that whenever you’re riding shotgun with Amarillo Slim, the getting is always good.