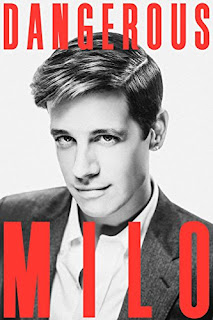 Dangerous by Milo Yiannopoulos
My rating: 1 of 5 stars

Former Breitbart editor and august internet troll, Milo Yiannopoulos, has forcefully presented to the world a book that’s both boring and shallow.
It isn’t offensive, shocking, or thought-provoking, in any way, certainly not in the way the author intended. It’s essentially a 250 page plea written by an amoral actor who likes to play the bad guy for money, someone who happened to be entertaining enough to have duped a publication into showering him with attention because at one time he had a lot of Twitter followers, with the hopes of ingratiating himself back into the fold of anyone who will have him.
But this book wouldn’t exist were it not for the scourge that has come to be known as “Identity Politics.”
Lionel Shriver said, “Membership of a larger group is not an identity. Being Asian is not an identity. Being gay is not an identity. Being deaf, blind, or wheelchair-bound is not an identity, nor is being economically deprived. These are adjectives. Identity is about who you really are. We should be seeking to push beyond the constraining categories into which we have been arbitrarily dropped by birth. If we embrace narrow group-based identities too fiercely, we cling to the very cages in which others would seek to trap us. We pigeonhole ourselves. We limit our own notion of who we are, and in presenting ourselves as one of a membership, a representative of our type, an ambassador of an amalgam, we ask not to be seen.”
Identity politics was created with good intentions in the 1970s following a series of cultural revolutions in the prior decade, unfortunately, it became institutionalized, and worse yet, it has somehow morphed into a separate ideology unto itself.
You can readily identify this ideology by the Lefts refusal to talk about the science behind transgenderism. The same people who easily accept any reference to science on questions concerning global warming flee all reference to biology when it comes to questions of gender.
In a recent New York Times opinion piece Gerard Alexander wrote, “Liberals dominate the entertainment industry, many of the most influential news sources and America’s universities. This means that people with progressive leanings are everywhere in the public eye — and are also on the college campuses attended by many people’s children or grandkids. These platforms come with a lot of power to express values, confer credibility and celebrity and start national conversations that others really can’t ignore.
But this makes liberals feel more powerful than they are.” Adding, “Liberals often don’t realize how provocative or inflammatory they can be. They regularly annoy and repel and are far more effective at causing resentment than in getting people to come their way.”
This book was originally dropped by Simon & Schuster, before being self published, after an interview with Yiannopoulos surfaced in which he appeared to brush off pedophilia. I myself have listened to that interview and was able to follow his logic without any problems and certainly without concluding that he was advocating for pedophilia. But most people have a difficult time following, let alone arguing, nuanced and emotionally charged topics.
I’m very interested in intellectual freedom and as soon as people began calling for boycotts over Simon & Schusters decision to publish this manuscript, I resolved to read it.
I can’t stand the thoughts of someone telling me what I can and can’t or should or shouldn’t read. That determination is mine and mine alone. I decide what I will or will not read. Not ideologically driven, identity-obsessed, participation award-craving liberals, or anyone else for that matter.
Christopher DeGroot said, “only through ignorance or suppression of the truth that anyone can believe in the leftist worldview, a kind of bad morality play that would be merely amusing were it not so influential.”
I understand that every “movement” inevitably ends up being defined by its own fringe elements, but the Left has done a terrible job at policing itself so as to keep those elements in check.
The Left just isn’t what it used to be.