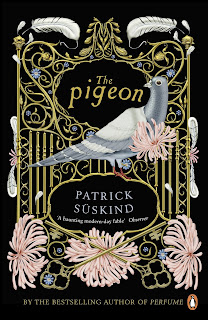 The Pigeon by Patrick Süskind
My rating: 2 of 5 stars

I recently “celebrated” my three year anniversary at my place of employment. When I first started this job it was only ever going to be a short term measure before moving on to something brighter and better but I still haven’t and suddenly its been three years later.
With the passing of this anniversary I have been thinking about the drudgery of my job, or work in general, the monotony and repetition and just how quickly three years has come up. So when I picked up this book and started to read it there was something about this strange and unsettling little story that resonated with me deeply.
The Pigeon focuses on a single day in the life of Jonathan Noel, a Parisian bank guard, who has finally attained a measure of happiness after years of personal strife. Totally satisfied with his job and the isolation he secures in his small apartment, Noel finds his serenity abruptly interrupted when a pigeon lands on his doorstep and remains there for the rest of the day. The event is so unnerving for Noel that he goes to sleep vowing to kill himself in the morning.
The story takes place in the span of one day, and follows how this seemingly insignificant event compounds to threaten Noel's sanity.
The titular pigeon can be seen as a symbol for disorder intruding on the protagonist's meticulously organized existence, and is obviously in ironic intertextual dialogue with Edgar Allan Poe's 1845 poem The Raven, which features its titular bird perched over its protagonist's door. But I prefer to see it as a symbol of liberation from the burden of what Andrew Taggart, practical philosopher and writer, might label as, “total work.”
‘Total work’, a term coined by the German philosopher Josef Pieper just after the Second World War in his book Leisure: The Basis of Culture (1948), is the process by which human beings are transformed into workers and nothing else. By this means, work will ultimately become total, when there remains no further dimension to life beyond work; when humans fully believe that we were born only to work. We are on the verge of total work’s realization. What is so disturbing about total work is not just that it causes needless human suffering but also that it eradicates the forms of playful contemplation concerned with our asking, pondering and answering the most basic questions of existence. What is lost in a world of total work is the very possibility of our experiencing meaning. What is lost is seeking why we’re here.
The irrational, the pigeon, once introduced into Noel’s life, infects his very being and what we witness is this infection running its course. And there can only be two outcomes: it can kill him or it can cure him.
Jonathan assiduously avoided irrationality throughout his entire life. But devoting himself to ‘work’ as a means to gain control over himself and his life was the greatest irrationality he could have committed.
The fear of a wasted life haunts all of us and our protagonist is certainly no exception. The transient he observes across the street makes him feel both resentful and nauseated. But why feel resentment? Because even though he may be derelict he is free in a way that our protagonist is not.
Bukowski said it best, “it’s the continuing series of small tragedies that send a man to the madhouse… not the death of his love but a shoelace that snaps with no time left … so be careful when you bend over.”