Book Review: I Feel Bad about My Neck: And Other Thoughts on Being a Woman 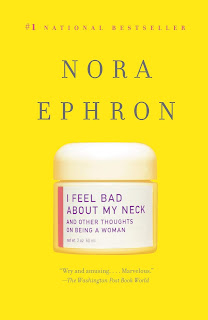 I Feel Bad about My Neck: And Other Thoughts on Being a Woman by Nora Ephron
My rating: 5 of 5 stars

I first picked up I Feel Bad About My Neck by Nora Ephron on a Sunday afternoon at our local library’s annual used book sale. I had been meaning to read her work for some time and now seemed as good a time as any.
She’s a very accomplished writer with a really firm grasp of the english language. She infuses her writing with wit and humor as well as feeling and depth and all this happens within the span of a single sentence.
Her essay “Parenting in Three Stages” was interesting, in it she wonders exactly when and why parenting became an infinitive and blames the women’s movement for turning the idea of raising children into a gender-neutral concept. She rally’s for the good old days when children’s personalities were something other than the handiwork of ambitious adults. Kids were allowed to become who it was they were supposed to become, that’s how it was for me, and I try to emulate that same style of parenting.
The fact that she was 65 when she wrote this book gives Ms. Ephron a plethora of unavoidable subjects for contemplation: age, loss and vanity. None are automatically delightful. But she retains an uncanny ability to sound like your best friend, or really, to me, like an older aunt, even when she is describing the death of one her own best friends in a sobering piece called “Considering the Alternative.” Which is a humorous and poignant reflection on becoming that age where your best friends all start to die. She tells of the passing of her best friend, Judy and another friend Henry. It’s clear to her, and to me, that no matter how much we have or don’t have in our lives, everyone feels the death of a friend as a punch in the gut and Ephron’s reaction isnt any different, but perhaps maybe it is more eloquent than most of us would be able to articulate let alone write an essay about.
This is a charming book, which is why I picked it up in the first place. I wanted to hear her voice and I wanted to experience the world from her perspective. I wanted her to charm me, and I wanted to be seduced by the writing, that’s really the only reason I read anything at all come to think of it.