Book Review: There Once Lived a Woman Who Tried to Kill Her Neighbor's Baby: Scary Fairy Tales 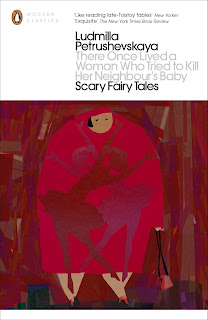 There Once Lived a Woman Who Tried to Kill Her Neighbor's Baby: Scary Fairy Tales by Ludmilla Petrushevskaya
My rating: 2 of 5 stars

Ludmilla Petrushevskaya, is a virtual unknown here in the States but a very big deal in her native Russia.
Many of these stories fit roughly into a category of literature that Franco-Bulgarian structuralist Tzvetan Todorov calls the Fantastic—simply put: texts that cause the reader to hesitate between natural and supernatural explanations for the events described, much like Henry James' The Turn of the Screw.
The fantastic can be present in works where the reader experiences hesitation about whether or not a work presents what Todorov calls "the uncanny.”
According to Todorov, this hesitation involves two outcomes: “The fantastic requires the fulfillment of three conditions. First, the text must oblige the reader to consider the world of the characters as a world of living persons and to hesitate between a natural or supernatural explanation of the events described. Second, this hesitation may also be experienced by a character; thus the reader's role is so to speak entrusted to a character, and at the same time the hesitation is represented, it becomes one of the themes of the work -- in the case of naive reading, the actual reader identifies himself with the character. Third, the reader must adopt a certain attitude with regard to the text: he will reject allegorical as well as "poetic" interpretations.”
The Fantastic can also represent dreams as well as wakefulness where the character, or readers themselves, hesitates as to what is reality or what is a dream. But again the Fantastic is found in this hesitation and once it is decided the Fantastic ends.
The blurb on the back on the back compares Petrushevskaya to Gogol and Poe. I haven't read much Gogol, so I'm not going to make that comparison. But I can see why some might compare her to Poe, although in translation her language is more fluid, more everyday and her tone, at times, is also more humorous than Poe’s.
Valentine Garfunkel in a review in PopMatters, an international online magazine of cultural criticism, had this to say about the book, “Ultimately, these stories were not intended to sustain such critical scrutiny. Condense in form and plot, There Once Lived a Woman Who Tried to Kill Her Neighbor's Baby is best approached as an assortment of appetizing little vignettes, best enjoyed compulsively, in one gulp, rather than chewed over. For in their plain, colloquial language, they evoke, in Petrushevskaya’s own words, the urgent hastiness of bus conversations, with the speaker “making sure you come to the point before the bus stops and the other person has to get off.” As everyone from the U.S.A. to the U.S.S.R. knows, the important thing is to make sure to get off the bus before the old babushka grasps your thigh with her horny, wrinkled palm, turns her withered face to you, and starts spinning one of her ole yarns.”
This book was in all honesty a big disappointment. It originally sounded like the kind of book I would love, scary Russian fairytales, but the stories soon became repetitive and were written in a very cold and distant way thus, I never felt any real significant sort of connection to any of the characters or it’s themes. A lot of weird shit happens yes, but not the kind of weird shit that you can appreciate. The only stories that stood out to me in any way were the title story, perfectly dark and twisted, and the very last story, The Black Coat, which was the only story that had any emotional impact on me whatsoever.