Book Review: The Caudills of the Cumberlands: Anne's Story of Life with Harry 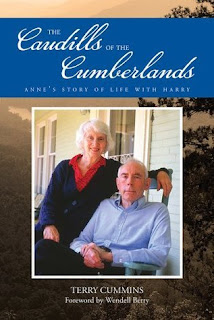 The Caudills of the Cumberlands: Anne's Story of Life with Harry by Terry Cummins
My rating: 4 of 5 stars

Harry Caudill deserves a great deal of credit for what little progress has been made in Southeastern Kentucky. He helped to establish some of the states first major strip-mining laws, which he fought long and hard for back during a time when taking such a stand was a lonely and dangerous business. His leadership was instrumental in bringing about school consolidation, the severance tax on coal, reclamation of strip-mined lands, and he even helped pass legislation making it legal for health departments to distribute contraceptives.
As one might suspect however Caudill was not universally popular, nor is he now. He is still praised by some and castigated by others, and that condition remains unchanged.
A more enlightened community would honor a man like Caudill as one of its finest citizens; but then, a more enlightened community would not have been so in need of his kind of exceptional public service.
David McCullough, in a piece for American Heritage magazine, shortly after publication of Harry’s groundbreaking book Night Comes to the Cumberland’s, wrote of Caudill, “About the worst thing anyone can say about him is that he gets “overemotional,” a term one hears used frequently against conservationists. Others say Caudill is a little sloppy with facts. Even Anne Caudill allows that “research has never been our line.” But Loyal Jones, who is the executive director of the Council of the Southern Mountains at Berea, Kentucky, and who knows Appalachia and its problems about as well as anyone, says, “To criticize Harry Caudill on accuracy is about like saying that Thomas Wolfe’s portrait of his mother was not precisely accurate. Harry speaks to sway people and to get at a kind of truth that is beyond facts and figures.”
He goes on to recount an experience he had while in Whitesburg doing research for the same article, “One afternoon last summer, when I was taking a photograph of Gish and Bethell in front of the paper’s office on Main Street, a burly strip-mine operator who happened to be standing nearby got so infuriated over what I was doing that he did what he could to ruin the picture, standing directly in the way and shouting in my face, “We don’t want any more of you goddamn outsiders coming around here giving this county a bad name.” The idea that strip mining itself might give the county a bad name, or that most strip miners are themselves “outsiders,” had apparently not entered his mind.”
Wendell Berry, Kentucky author and poet and a great admirer of Caudill’s, is convinced that the logic of such men is corroded by the jargon of free enterprise—”as if,” he says, “the freedom of free enterprise implied freedom from moral responsibility.” “Just imagine this,” he says. “If those three men who went to the moon had started to befoul their spacecraft, if they had begun to tear it apart and fill it with all manner of filth, we would say they had gone mad. But here we are on this planet, this huge space ship, befouling it, ripping it asunder, and nobody seems to say very much about that. Nobody seems to care.”
Harry Caudill killed himself with a gunshot to the head in November of 1990, faced with an advancing case of Parkinson's disease. He took his life in full view of his beloved Pine Mountain. He loved the mountains and he loved his wife and he couldn’t stand the thoughts of becoming a burden to her. That’s not what love is.
Anne’s recollection of Harry’s death and his ultimate decision to end his own life forced me to consider the amount of courage it must have taken for Anne to accept Harry’s decision and forgo any medical intervention that may have saved his life. It’s a courage that I don’t know if I would be able to summon myself if I was ever called upon to do so.
Anne Caudill was a steadfast presence in Harry’s life and Anne’s firm resolve shines through in this wonderful biography of a marriage and of a life spent living well together and intentionally.
The Caudills of the Cumberlands is a book that feels like it’s trying to be more than a book. It’s trying to capture a lifetime. It’s a patchwork of interviews and stories and local history, all woven together in an attempt to form one complete, coherent narrative. It’s essentially one long transcription, often repetitive, and while I won't say this book was eloquently written it was respectfully written and did provide what I had hoped it would, which was a glimpse into the life of Anne and Harry and the times in which they lived.
Two days before his death, Whitesburg’s Mountain Eagle published an article in which Harry urged the people of the county to insist that the great corporations that had robbed their county contribute to the public library system there. That plea brought $1,000 as a personal contribution from one coal company owner who was himself a Kentuckian.
Al Smith, a noted journalist and TV host, during a dedication speech for the new Harry M. Caudill Memorial Library said, “We know that night comes to the Cumberlands, but here was a life that inspired us to search for the dawn. The very idea of a better Appalachia was his legacy to us.”