Book Review: Eaters of the Dead 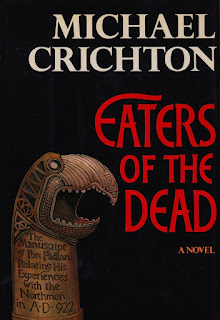 Eaters of the Dead by Michael Crichton
My rating: 5 of 5 stars

In a note at the end of this book Crichton explains that the origins of this novel originate from an argument, with a friend and lecturer, who believed that several of the old classical texts he taught were utterly laborious and only continued to be read by academics simply because they were viewed as “crucial to Western civilization.” One of the stories mentioned in this argument was the epic poem Beowulf, which Crichton defended and decided to turn into a novel, which he claimed could still sell and be enjoyed by a modern audience.
The novel is set in the 10th century and the Caliph of Baghdad, Al-Muqtadir, has sent his ambassador, Ahmad ibn Fadlan, to the king of the Volga Bulgars. He never arrives. Instead our protagonist is conscripted by a group of Vikings to take part in a hero's quest to the north.
Ahmad ibn Fadlan is taken along as the thirteenth member of their group to satisfy a soothsayer's requirements for victory. There they must battle with the 'mist-monsters', or 'Wendol', a tribe of vicious savages, suggested by the narrator to have possibly been the remnants of a lost Neanderthal tribe, who go to battle wearing bear skins.
The first three chapters are a retelling of Ahmad ibn Fadlan's personal account of his actual journey north and his experiences with the Vikings. The remainder is based upon the classical Scandinavian myth of Beowulf.
While not viewed purely as a modern retelling, Eaters of the Dead and Beowulf do share many similarities. In each, a king turns to a hero from a far away land to help kill a monster that is threatening his kingdom. Both heroes must undertake a great battle and ultimately defeat their enemies. But the heroes in the end suffer fatal wounds as a result of their heroic deeds.
Crichton goes to great lengths to make Ahmad Ibn Fadlan’s account seem realistic, including using an actual historical figure to ground the entire narrative, adding pedantic and fictitious footnotes, and using an outsider’s manuscript, serves to provide us with more insight into the Viking world as the narrator is observing and explaining the things he sees in a way that a native wouldn’t be able to.
Symbolists believe that art should represent absolute truths that can only be described indirectly. Symbols allow people to go beyond what is known or seen by creating linkages between otherwise very different concepts and experiences.
Julia Kristeva has theorized that in order to be initiated into the symbolic order one has to submit to masculine functions and say farewell to the feminized pre-Oedipal space of the mother-child bond.
In Beowulf, the second monster the hero must fight is Grendel’s mother. A direct parallel to this she-beast is the “mother of the Wendol,” a cannibal woman who is worshipped by the rest of the tribe. Many critics underestimate how frightening this mother actually is. Like Grendel’s mother, she is a vicious, somewhat masculine female, and she is made all the more horrifying by the fact that the role of motherhood has been distorted into something sinister.
Through the worship of the female mother, the Wendol are left barbaric and uncivilized, while the Northmen, who have pushed the maternal away, have evolved into more refined civilians.
This process of separation is known as abjection, whereby the individual must reject and move away from the mother in order to enter into the world of language, culture, and meaning.
The story also suggests that perhaps this monstrous woman is perceived as monstrous simply because of the deformation of gender and motherhood roles that she represents, and that perhaps the description of Grendel’s mother in Beowulf as a “monster-woman,” “she-wolf,” and “water-witch” is simply an exaggeration of the fears of masculine characteristics and violence in a woman. There is even a point in which Beowulf refers to Grendel’s mother as a “he.” This shows that he either wasn’t sure of the creature’s gender due to physical form, or that he couldn’t conceive of a creature as violent as she was a woman, let alone a mother.
What the Eaters of the Dead shows us is that myths such as Beowulf could have very easily of been a true story, and that the monsters and mythical beings portrayed in this epic tale could have been, in actuality, the exaggerated terrors of the people who feared what they didn’t understand.