Book Review: The Long Hard Road Out of Hell 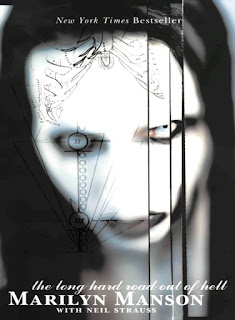 The Long Hard Road Out of Hell by Marilyn Manson
My rating: 5 of 5 stars

Marilyn Manson’s 1998 autobiography, The Long Hard Road Out of Hell, is notable for two reasons. For one, it was co-authored by Neil Strauss, his first foray into rock star hagiography, and two because, and despite this fact, the book is actually really enjoyable and highly relateable in a way that I wasn’t expecting.
It vividly chronicles Manson's rise to fame at the price of his humanity and his descent through the circles of Dante's Inferno: Lust, Violence and Treachery.
His story is illustrated with dozens of previously unpublished photographs and features legal documents of claims made by the American Family Association about his shows, that were later proven to be false. It even includes some of his journalism works, including an article about a dominatrix he interviewed for the 25th Parallel. Following on from the main body of this fractured fairy tale, the remaining portion transitions into a journal of the band’s touring, with stories and events detailed with the same audacious approach as the rest of the book.
“My grandfather had been the ugliest, darkest, foulest, most depraved figure of my childhood, more beast than human, and I had grown up to be him, locked in the basement with my secrets as the rest of the family reveled in the petty and ordinary upstairs.”
Manson’s grandfather had a massive influence on the man he would later become. Manson and his cousin discovered their grandfather’s basement and its secrets at an early age and it became for them a place of both fear and fascination. His grandfather kept an arcane collection of hardcore pornography, and cross-dressing wigs and dresses. During one of the opening scenes Manson recounts watching his grandfather masturbate to photos of bestiality and sadomasochism. His grandfathers sexual fetishes embraced every conceivable preference.
“Occasionally, something will happen that will change your opinion of someone irrevocably, that will shatter the ideal you’ve built up around a person and force you to see them for the fallible and human creature they really are.”
I myself have had similar experiences with finding abstruse pornography stashed away at a relatives house, either in a drawer or hidden on a closet shelf, or in a cabinet, and it’s very disconcerting when it happens. Mostly because no one generally wants to view anyone in their family as a sexual creature, especially if they are above a certain age and especially if they have hardcore inveterate predilections.
For me, and later my brother, our “basement” subsisted in our Uncles workshop where an untold amount of pornography was discovered and subsequently consumed.
“As a child, you accept whatever happens in your family as normal. But when puberty hits, the pendulum swings in the other direction, and acceptance turns into resentment.”
I myself can attest to the truthfulness of such a sentiment. Only until fairly recently, after telling my wife haphazardly about things that occurred in my childhood, and then judging her reaction to those stories, did I find out that the things I took as normal at the time were in fact highly unusual and not common to everyone in the least. For example we, my brother and I, used to have to color our fathers toenails with a crayon of our choosing, the color didn’t matter, and then, taking a Q-tip dipped in a cup of water, rub the coloring off of his feet letting the water run between his toes.
Now that I view this experience from an outsiders perspective I can’t see how I ever thought it was normal to begin with and I certainly can’t comprehend why I would ever consent to such a request.
Manson speaks quite openly about his life and philosophies and his thoughts on a number of controversial and affectional subjects. Homosexuality, self-mutilation, love, sex, drugs, hatred, consumerism, vanity, religion and ‘the-American-way-of-life’ all come under his purview.
Manson does however come across at times as pretentious in a way reminiscent of some stereotypical angst ridden adolescent. Although with the pessimism of today it’s hard to tell if someone is being truly authentic or simply hiding behind a mask of detachment and inauthenticity for the sake of persona.
Most of what he says is really no different than the shit brooding teenagers, myself once included, usually say before maturing past the age of fourteen. But again, I couldn’t put the book down.