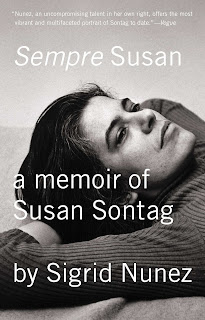 Sempre Susan: A Memoir of Susan Sontag by Sigrid Nunez
My rating: 3 of 5 stars

Real writing, will tear your guts out.
At the age of 25, Nunez, a recent Columbia graduate, came to work alongside Sontag as her secretary. Within weeks she had started dating Sontag’s son, David Rieff, and within months she had joined the two in their apartment on the Upper West Side.
It was a very unconventional arrangement, as many people, they’re friends included, commented, but as Sontag quipped, “Who says we have to live like everyone else?”
With simple and yet devastating clarity, Nunez lays out for us how an intense influence can be as deforming to a person as it is enlightening.
Nobody becomes a writer, or wants to become a writer, because they have a fulfilling, stable, or conventional, life.
Hardwick used to tell her Barnard students that you had to be really bored with life to become a writer.
Which begs the question, am I drawn to the written word because I was, or am, essentially a lonely, perhaps even a depressed, person?
I don’t know. The only real answer I have to this question is that growing up my mind was dominated with one obsessional disposition, that I didn’t want to grow up and tolerate a life that everyone thinks they’re supposed to.
Walter Dean Myers said that when he “began to read, he began to exist.” It was the same for me.
Which is also why, for the most part, I didn’t bother to excel at school. Most of my education took place after class, where I escaped into a world of books. I watered my mind with them and soon I had a garden.
My first feeling about everything I write is that it’s shit, but the real hell of it is is that if you aren’t regularly tormented by self-doubt, your work probably is shit. A sense of failure clings to you like widows weeds.
The question you have to ask yourself is whether what you’re writing is necessary.
Writing should be a cudgel wielded to chase away the marauders who would choose to burn down the precious things of the human heart. But words still count. They still break hearts, and they still heal. They still matter.
But as a rule, every writer would probably be better off doing something else, almost anything else.
The only thing I know for sure about writing is that people who write drink bourbon and sit around in bars using words like, "servile.”
Writing is an unnatural act, and it takes great skill to make it sound natural. Writing is like a secret you don’t want to tell but want everyone to know.
I have always felt that my interests and pursuits were never recognized as meaningful to my family and friends. That was the sense I generally had. It almost felt like contempt.
I don’t know what I did to be so hated. If it was just being myself, then I guess that’s just the price I had to pay.
But in the end, none of it matters anyway, what happens to you in life. Not suffering. Not happiness or unhappiness. Not illness. Not prison. Nothing.