Book Review: The Undercover Edge: Find Your Hidden Strengths, Learn to Adapt, and Build the Confidence to Win Life’s Game 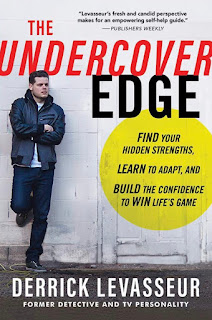 The Undercover Edge: Find Your Hidden Strengths, Learn to Adapt, and Build the Confidence to Win Life’s Game by Derrick Levasseur
My rating: 3 of 5 stars

I have been a fan of Derrick Levasseur since watching him masterfully take control of, and then ultimately win, Big Brother 16. So as soon as I heard that he had a book in the works I knew I had to read it.
In The Undercover Edge, Derrick shares his personal mindset surrounding human behavior and motivation.
During his stint on the televised social experiment known as Big Brother, Derrick demonstrated, in front of millions, the same techniques he outlines in the book and how they can help you achieve you’re goals in similar social situations.
People’s behaviors are generally shaped by the interactions of personality and situation and when we talk about other people’s behavior we gain some perspective on how others in our social network feel about that behavior and learn what is and is not acceptable, which is adaptive to fitting in.
Derrick also talks about how to effectively listen to others and how to observe their body language while doing so. He also gives leadership and management advice and even covers visualization techniques, growing through adversity, and the importance of having good mentors in your life.
As a student of psychology I’ve always been fascinated by social interactions, what makes someone like-able? What makes people tick? etc. and it frustrates me greatly to hear people dismiss Big Brother as mindless trash.
The appeal of Big Brother is that it serves a therapeutic function for, us, the viewers.
We all have needs that must be met, i.e. the need for acceptance, the need to achieve our goals, to belong, and our own self-interest. The show dramatize’s these tensions for us, which is the tensions between competing needs. So there is a cathartic, therapeutic function for viewers who must also struggle to balance these needs in their own lives.
We get to observe individuals from a vast range of backgrounds come together in a patchwork of culture, values and beliefs, subsequently resulting in an inevitable clash of personalities and moral codes.
Every year houseguests fill a series of reoccurring roles, or archetypes, for us, e.g. we procure an ‘alpha’, a ‘villain’, a ‘mother’ and various other positions that are often reflective of our real life environments. Big Brother allows us to understand how and why these roles are formed and what exactly these roles require.
To put it another way the show externalities anxieties about rejection and exclusion and thus gives public expression to an uneasiness that is often experienced as privately shameful. Which is what also allows viewers to identify with those same on screen personalities.
The social maneuvering that takes place throughout the game, and in-particular prior to voting, is used to help identify who the social outcasts are for any given week. In other words, it creates social isolation as a way to assess threats to the dominant alliance. Once this isolation has been established those who have been ostracized will be easier to control, as the excluded will have then lost self-determination, meaning, they will have no say as to when, or if, they will ever be included again. Big Brother explores the effects of this isolation, and various other social pressures, and how they come to influence social environments.
It’s hard for me to differentiate this book from an endearing letter to an old friend giving them advice when their life seems to be falling apart and a simple self-help manual. Derrick comes across as a very genuine guy, which is rare, especially in the reality television world. It’s also an easy read, clocking in at about 248 pages, and although he relies a little too heavily on the self help-lingo, which makes him seem gimmicky, the book still remains resolutely inspiring.
It is always wise in Big Brother, as well as in life outside the game, to seek first to understand, then react. If you take nothing else away from the book but this, then your already ahead of the game.