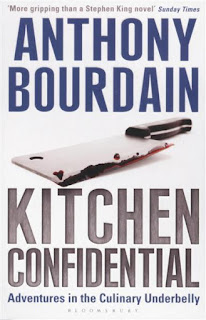 Kitchen Confidential: Adventures in the Culinary Underbelly by Anthony Bourdain
My rating: 4 of 5 stars

When you think about disgusting behavior you also often start to think about risky behavior. By eating or drinking things that might be contaminated or by risking social ostracism through the flouting of the polite rules of society, you are putting yourself on the line, you are risking serious illness or excommunication from your group. But if you can take such risks and survive them, you are showing others that you have special qualities.
Bourdain is a very clever and fluent writer and his vivid prose style alternates between confessional narrative and an industry commentary, providing insight along with humorous anecdotes on the cooking trade, from his years of experience in the industry.
The books life actually began as an article in The New Yorker entitled 'Don't Eat Before Reading This', which served as the foundation for Kitchen Confidential and catapulted the brash Bourdain to celebrity status, spawning a 2005 Fox series starring Bradley Cooper and two long-running cable series hosted by the real Bourdain: Travel Channel's No Reservations (2005-12) and CNN's Parts Unknown, which began in 2013.
When Kitchen Confidential was first published, The Times gave it a rave review, saying that “Bourdain gleefully rips through the scenery to reveal private backstage horrors little dreamed of by the trusting public” and describing his style as a mishmash of Hunter S. Thompson, Iggy Pop and Jonathan Swift.
But what really makes Bourdain's writing sing for me is his complete understanding that food is not a subject for aesthetes. It's a belly thing, not a head thing.
Bourdain also has a tender side to him, and it peeks through his rough exterior and the wall of four-letter words he constructs, and elevates the book to something more than a blustery memoir.
One of the best jobs I ever had was working as a short order cook in a local diner. Not because it paid well or because it was glamorous, but because I genuinely enjoyed it. It was fun. I loved the pace, the food, the smells, even the arguments with the staff. I felt alive while I was there and I can tell you with certainty that everything Bourdain describes is true: every sordid, scandalous, wonderful, funny, creative, and amazing bit of it. It's the kind of life that leaves you with literal and figurative scars that will never heal. The grill instilled in me some painfully, loaded, duplicitous lessons. Lessons which I myself am still finding useful to this day.
This is the culinary life. The life you choose, the life you love. It doesn't matter if you’re white, black, yellow, gay, or straight, a man or a woman. The only thing that matters in the kitchen is if you can pull your own weight.