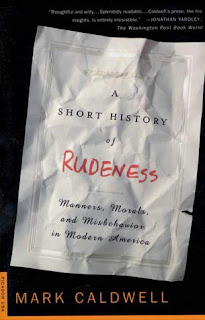 A Short History of Rudeness: Manners, Morals, and Misbehavior in Modern America by Mark Caldwell
My rating: 3 of 5 stars

Beware the moralists of manners, the self-appointed defenders of civility who offer to regulate every day behavior with the authority of a lawgiver. Behind it, however well it may be meant, lurks the urge to control, to punish, to make ourselves part of the “good” class and to brand anyone who fails to conform as a brute.
Values are always somebody’s values and modern politesse has more to do with schmoozing and perceived social status than fretting over which fork to use at dinner.
These type of rules have nothing to do with good or bad behavior - they are essentially just "class indicators.”
But there is a big difference, in my opinion, between these “class” indicators and rudeness, a very important difference.
Just because someone is lacking in manners doesn't mean that they've been rude. For example, someone who buys you a wedding gift that isn’t on your registry, may be violating some rule of etiquette, but rude is showing up to the wedding empty-handed and making a loud announcement that since you're likely to be divorced within a year the attendant didn't bother to buy you anything at all.
So in this vein the book isn't really about rudeness as much as it's about class, or rather class systems that are still at play in America and how different classes of people interact with one another and the rules that govern those interactions.
Debates about manners have always acted as a good excuse for indulging our eternal obsession with class, while pretending to be talking about something else.
Etymologically, “etiquette” means “ticket” and people have always tried to use etiquette as a forged passport to worlds they didn’t belong in.
But there is no social mobility any longer. We experience the sensation of social movement only because the system of classes itself is unstable, perpetually realigning itself beneath us.
Class of some kind is the very mold in which civility is cast and etiquette represents the very essence of caste, since the prestige of a superior always involves the respect of an inferior.
Bosses, for example, can be seen as rulers; workers, however deftly soothed, are inferiors. Bosses may behave considerately, but when they do, workers owe them deferential gratitude. We call this manners or etiquette, but what is it really?
We need to look no further than ourselves for the cause of confusion over manners. For we ourselves haven’t fully decided whether civility is true liberation or genteel slavery.
People also seem to think that the deepest essence of rudeness is somehow epitomized in their latest brush with it, and brusquely dismiss competing definitions of what rudeness even consists of.
Chuck Klosterman writing in, I Wear the Black Hat, summarizes our situation succinctly, “Most of what we classify as “niceness” is effortlessly fake. When I walk into a convenience store and give the kid behind the counter two dollars for a $1.50 bottle of Gatorade, I say thanks when he gives me my change. But what am I thankful for? He’s just doing his job, and the money he returns is mine. The kid behind the counter likewise says thanks to me, but I have done nothing to warrant his gratitude; I wanted something in the store and paid him exactly what it cost. It’s not like he brewed the Gatorade or invented the brand. I didn’t select his particular store for any reason beyond proximity, and he doesn’t own the building or the franchise. From either perspective, the relationship is no different from that of a human and a vending machine. We only say “thank you” to be seen as nice. We secretly know that being seen as nice is the same as being nice in actuality. If you present yourself as a nice person, that becomes the prism for how your other actions are judged. The deeper motives that drive you can only be questioned by those who know you exceptionally well, and (most of the time) not even by them. If you act nice, you’re nice. That’s the whole equation. Nobody cares why you say thank you. Nobody is supposed to care; weirdly, this is something we’re never supposed to question. It’s impractical to incessantly interrogate the veracity of every stranger who seems like a blandly nice citizen. It’s rude. Until proven otherwise, we just accept goodness at face value.”
Good manners are related to morals, just not in the way we generally think. The link is far more deceptive, sinuous, and complicated than is usually admitted by those who yearn to restore some hypothetical lost bond between civility and ethics.
In short, I like the idea behind the book much more than it’s execution. The pace was slow and the writing was dry and lifeless. More attention was paid to style than substance, and the extensive vocabulary that Caldwell deploys, whilst it often fits, sometimes feels forced, especially when there are plenty of perfectly suitable, better known alternatives available. In this way it would seem he didn’t really know whom his target audience was or in fact should be. I’m not actually sure either. It did pick up a little towards the end but the rest seemed to be at pains to gradually get me to return it to the shelf.