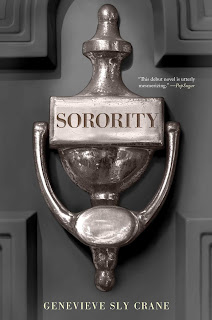 Sorority by Genevieve Sly Crane
My rating: 4 of 5 stars

It’s easy to blame younger generations for not being adults in the way they are supposed to be.
You’re supposed to have become something by the time you leave college. It’s one of the only reasons people still enroll. There’s a promise attached to the end of a degree.
But a university, for all its wonder, has become an anachronism, with many jagged edges grinding against each other at all times, while students try and maneuver through the gaps.
So in this way Sorority offers us a strange sort of deliverance, one that’s bursting with sharp insight, all the while unearthing the contradictions of our western cultural narratives.
Sorority doesn’t have a conventional plot or structure. It’s been described by other reviewers as a “stand alone story collection” but really it’s a series of variations on a theme. That theme being one of tragedy, or rather the bleakness of tragedy as it’s foisted upon a lost generation, consequently my generation.
In every Greek myth, tragedy was unavoidable which made it one of the most important genres of all the Greek dramas.
Tragedy dealt with the big themes of love, loss, pride, the abuse of power and the fraught relationships between men and gods. Typically the main protagonist of a tragedy commits some terrible crime without realizing how foolish and arrogant he has been. Then, as he slowly realizes his error, the world crumbles around him.
Margot’s death serves that purpose. Her death fractures the consciousness of an entire community into a before and an after. Which is how we remember, or rather how we structure, the narratives of our lives. All the major events in our lives, death, marriage, even losing our virginity, are broken up into a before and an after, and each sister seems to meditate upon this structure. This is what makes Sorority so poignant and important. It isn’t the tackling of issues that we would normally expect to find on a college campus but rather the unflinching look at the way each sister views their own transition into adulthood, that makes the book so important.
However, when you come to the end of Sorority you will not find a happy ending, or really, any ending. What you will find is the sudden urge to dive in and read it all over again, because stories like these get under your skin and never quite leave you alone again, resonating from a place that’s often left unarticulated.
What this book seems to suggest is that maturity, as we understand it, is about looking at the things that give our lives meaning and then simply having the courage to stand behind them, even though they are in fact empty. Each individual getting to decide what story to tell themselves, or whether they will even tell one at all.