Book Review: What Matters Most is How Well You Walk Through the Fire 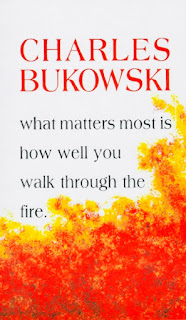 What Matters Most is How Well You Walk Through the Fire by Charles Bukowski
My rating: 4 of 5 stars

There is very little left original to say about Charles Bukowski anymore.
Bukowski is that type of writer who takes you deep into the raw, wild vein of writing and for me, one who exists at the intersection between the touching and the haunting.
He is one of the most influential and imitated poets America has ever produced and his poems are executed with all the boldness and audacity of a German expressionist painter.
You don't even really need to be intimately familiar with his world of seedy bars, vulgar whores, sketchy hotels, and the harsh Los Angeles sun to know where he is coming from. His poems are permeated with such sheer, exacting, even frightening, beauty, that anyone can relate to them. Such as the heartbreaking poem “no title" featured here in its entirety:
“all theories
like clichés
shot to hell,
all these small faces
looking up
beautiful and believing;
I wish to weep
but sorrow is stupid.
I wish to believe
but belief is a
graveyard.
we have narrowed it down to
the butcherknife and the
mockingbird.
wish us
luck.”

The very essence of his poetry derives from his aims at chronicling nothing more than the impulse to make poetry. It’s gestation made visible, the often awkward attempt to have something exist and exist uniquely.