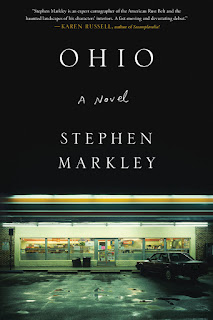 Ohio by Stephen Markley
My rating: 4 of 5 stars

The mind always ends up returning to certain memories over and over again simply because it can’t easily or fully assimilate them. Those mixed and complex feelings for childhood friends and the power of high school, for most of us, comprise the majority of those memories, thoughts that never quite go away and high school, as the author states, can provide “stories of dread and wonder you could easily wrap whole novels around.”
Markley also thinks, and I agree with him, that, “you could look at anyone’s high school homecoming picture from any middling town or suburb in America, and they all looked like stock photos, the image that came with the frame, identical teenagers doing identical teenage shit and hoping it wouldn’t end because what lay beyond was too unknown.”
Ohio is an illuminating snapshot of our current era masquerading as a contorted character driven thriller, filled with sardonic wit and soul shaking pathos. It’s a eulogy to middle America. A call to arms for those forgotten pockets of the countries dispossessed whose voices no one cares to hear anymore.
The story introduces separate threads that all weave together into one complete narrative. The setting is the fictional New Canaan, Ohio, which plays on the Biblical Canaan which was the promised land of the Israelites, the land of milk and honey. New Canaan, however, is the land of broken dreams and anguish. Regrets and secrets are carried on the wind, but never leave, everywhere we look we are reminded of memories loaded with shame, humiliation, resentment, rage, ugliness and a vague wistfulness for something that never was. A promise of a life with more, and a need to hold someone or something accountable.
At face value this is a story about a town and the people who inhabit it. But what lends Ohio its remarkable poignancy is the way it handles the passing of time.
Time has taken the characters future, and they can never get back to find it.
That’s what time does, it takes from us, our youth, our innocence, our illusions, our hopes, our dreams, and our love.
Yet, despite forsaking themselves, their friends, their town for possessions, for dreams and ambitions, they always end up returning. Each time dissatisfied and still desiring more. For in that place the memory of wholeness lingers, forever engraved in the towns memory.
This nostalgic yearning is Sehnsucht, the rich German concept C.S. Lewis described as the “inconsolable longing for we know not what.” It is “our lifelong nostalgia, our longing to be reunited with something in the universe from which we now feel cut off.”
In Lewis’ view, while this longing often springs from childhood memories or things of beauty, those are mere stand-ins. Ultimately, we desire “something that has never actually appeared in our experience.” Lewis identified this as our “far-off country,” the home to which we have never been.
We are both the town and it’s people and the times we remember are gone. Our days of wholeness lie not in the past, but in the future, in a far off country, one in which we will never see.