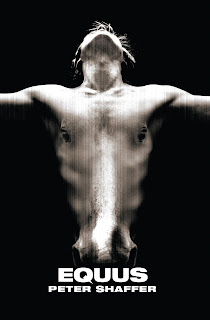 Equus by Peter Shaffer
My rating: 5 of 5 stars

A child is born into a world of phenomena all equal in their power to enslave and since Dysart can’t account for this power he is forced to question his whole profession, even his whole existence.
Shaffer was inspired to write Equus when he first became aware of a crime involving a 17-year-old boy who blinded six horses in a small town near Suffolk. He then set out to construct a fictional account of what might have caused the incident, without knowing any of the details of the crime. The character Alan Strang is actually written not as a person but almost as if he’s an answer to a question. The plays action becoming something of a case study rather than a drama, involving the attempts of the child psychiatrist Dr. Martin Dysart to understand the cause of the boy's actions.
Dysart is tasked with treating Alan because he is believed to be suffering from some sort of deep psychological disturbance. But Dysart argues that the cause of this disturbance might not be entirely unwanted, which sets up a major theme of the play. Removing this disturbance comes with a price, as this disturbance is a product of Alan's extreme passion. To remove the disturbance would be to remove the passion as well, and without this passion, Alan would have very little left of himself. Dysart is even jealous of Alan's disturbance, since he feels that he has none of this kind of passion in his own life.
Shaffer's story is loaded with Freudian and mythological trappings and the play itself was actually written in the shadow of the then voguish theories of R. D. Laing, which championed the creative beauty within madness while fixing blame on the repressiveness of the conventional family. So what Equus argues then is that normal is not always ideal, and that madness is constructed by society.
Most important however are the religious themes featured in the play, and the manner in which the character Alan Strang constructs a personal theology involving the horses and the supreme godhead, "Equus". Alan sees the horses as representative of God but confuses his adoration of his "God" with sexual attraction. His personal identification with horses becomes a focus for his own, as well as his mother's, fascination with the passion of Christ, his deep seated masochism, and his latent homosexuality. However the play only suggests his sexual orientation in a flashback to his childhood encounter with the horse and its rider, who are cast in specifically sexual terms. Alan’s masturbatory fantasies elaborate on his obsessions. And when he gets a job in a stable, he takes the horses out at night and stands for hours next to them, naked, sharing their presence. Later when a girl at the stable becomes attracted to him, she offers herself to him. But he is impotent and ends up blinding the horses in a fury of self-hatred.
While Dysart can acknowledge that what Alan has done is unspeakable. He also realizes that he can see, after shining a light into the recesses of the boy’s mind, the landscape of a self-made, chthonic religion. For Dysart, a man in a sterile marriage who has measured out his life in patients’ files and annual holidays in Greece, Alan’s inner existence takes on the mythic grandeur of Homer’s Olympus.
In any case, this is a play about someone who sees and feels more deeply than ordinary folk and the idea that such depth is to be envied even if it prohibits its possessors from fully belonging to human society.