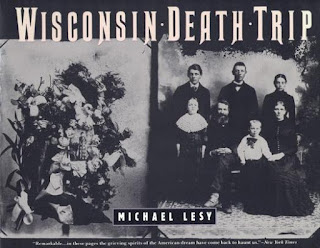 Wisconsin Death Trip by Michael Lesy
My rating: 3 of 5 stars

According to photojournalist Ted Grant, “When you photograph people in color, you photograph their clothes. But when you photograph people in black and white, you photograph their souls.” In a sense then a photograph becomes a link to eternity, one that toys with resurrection making what is absent present. Photographs become something like an immortal object, undead, and we wake the dead thing each time we look at them making us witnesses to that eternity.
Michael Lesy's Wisconsin Death Trip sets out to capture a time and a place, Black River Falls, Wisconsin, shortly before and after the turn of the 20th century. The book was published in 1973 and is assembled from photographs of Charles Van Schaick, a local photographer who captured images of the town and its residents, and is juxtaposed with newspaper clippings from the Badger State Banner, a weekly newspaper tasked with reporting both the mundane and the morose goings-on in Black River Falls and surrounding Jackson County. It was edited by Frank Cooper and his son George whose style of reporting consisted of small chunks of copy, written in a pared-down, matter-of-fact style.
None of the pictures carry any captions or descriptions however, so the faces one sees throughout the book are nothing more than nameless ghosts and the book itself has no clear beginning or narrative structure. It’s an “alchemy,” as Lesy calls it, of carefully chosen fragments of history layered together. “It’s a way of using pictures and words to tell a story,” he notes. “I wanted to provide people with an experience.” By treating images and excerpts in this way, Lesy gives birth to a new kind of “poetic history” that makes tangible the experiences that other kinds of history writing often overlook.
For most Americans, the last decade of the 19th century was a time when great fortunes were to be made. For many others, however, that time period was one of economic dislocation, when the gap between city and countryside, rich and poor, grew ever wider. Industries were shutting down, leaving people unemployed and desperate. Faced with economic depression, a brutal climate and a diphtheria epidemic that decimated its infant population, a good number of the citizens of Black River Falls, most who were recent German and Scandinavian immigrants, went berserk and many found themselves incarcerated in the nearby Mendota Asylum for the Insane.
Women killed themselves over grief at the death of their children. Men killed themselves for lack of work. A brother and two sisters go insane within weeks of each other, a woman poisons her baby with strychnine, another slashes her stomach with a butcher knife, and a man blows his head off with a stick of dynamite. In separate incidents, two elderly women douse their bodies with kerosene and set themselves ablaze.
Many historians concern themselves with American aspirations and hopes, but few with its fears and delusions which is why Lesy’s book remains one of the bleakest, most devastating accounts of rural American life ever published. It offers us a unique opportunity to face not the America Dream but the American Nightmare.
The town of Black River Falls, Wisconsin eventually recovered, but this small town will forever be remembered for the many terrible events that took place in the span of just 20 years.