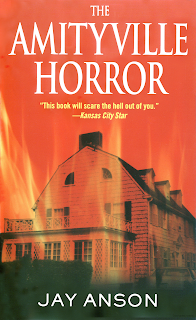 The Amityville Horror by Jay Anson
My rating: 2 of 5 stars

On November 13, 1974, Ronald DeFeo Jr. shot and killed six members of his family at 112 Ocean Avenue, a large Dutch Colonial house situated in a suburban neighborhood in Amityville, on the south shore of Long Island, New York.
Thirteen months later, George and Kathleen Lutz purchased the five bedroom home and moved in with their three children but ended up vacating the premises shortly thereafter, claiming that they had been terrorized by some sort of malevolent paranormal phenomena while living there between December 1975 and January 1976.
It’s impossible to talk about the alleged haunting without also talking about the murders, they’re both inextricably intertwined, but what any fan of horror quickly realizes about the Lutzes claims is that they have obviously been pieced together from a variety of haunted house tropes in order to tell the story of the ultimate haunting.
Was the house built on an ancient Native American burial ground or the site of a kind of Native American asylum or wait, was it the home of an escaped witch from Salem? No, actually, it was the site of devil worship with animal and human sacrifices, or was it? All of these hypotheses were supposedly true about the house. That’s not all though, there was also a well in the basement where evil things may be hiding and escaping from.
The family was apparently in a lot of debt during this time, which led to rumors that they were simply after a movie or book deal as a result of their story. The Lutzes even had a falling out with their attorney over financial issues; he has since said that the haunted house stories were an elaborate ruse by the Lutz family to get themselves out of debt. Ronald DeFeo, Jr.’s own lawyer, William Weber, has even said that he met with the Lutzes on several occasions and they “created this horror story over many bottles of wine.”
The house has had various owners since the Lutz family left in 1976, all of which have reported no problems while living there. James Cromarty, who bought the house in 1977 and lived there with his wife Barbara for ten years, commented: "Nothing weird ever happened, except for people coming by because of the book and the movie."
Anson’s book, based on the Lutzes claims, is a quick and easy read, mostly because it appears to have been quickly and easily written. He utilizes a true crime journalistic style of reporting which does keep you reading until the end, even if when you get there, you put the book down, roll your eyes, and walk away.