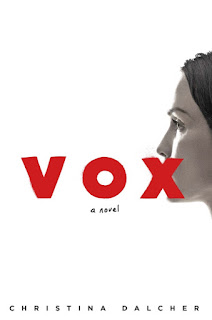 Vox by Christina Dalcher
My rating: 1 of 5 stars

Most of us begin our lives seeing our parents as the ultimate authority, and we incurred their wrath whenever we questioned that authority. Unfortunately, this bad habit is often carried over into adulthood where we replace our parents with either a boss, a teacher, a commander, or a god. Rather than question their authority, we blindly follow it. This fallacy alone has likely resulted in more deaths, pain, suffering, and misery than we would perhaps ever be willing to appreciate.
Vox is the latest speculative thriller to jump on The Handmaid’s Tale bandwagon. It opens during the administration of a totalitarian leader elected after the term of America’s first black president. The Pure Woman movement has hijacked the capital and the culture. American women are allowed to utter no more than 100 words a day. Any more and a wrist strap fitted with a counter zaps its wearer with an electric shock, relatively mild for first-time infractions, but intense enough to cause serious injury later on. Women who campaign against the newly installed regime or commit other offenses against the gender based laws become slave laborers in scarcely populated states. However just when Vox needs to sink in and give a fuller sense of its own political and social world, the story becomes fatuous. As the narrative progresses it just gets further and further away from anything that is interesting or meaningful and ends up morphing from a glum prophecy into a Hollywood-style action movie, complete with gun-toting bad guys howling, “Don’t do anything stupid, Jean”, and a wrap-up that is so convenient it beggars belief. Carrie O’ Grady, writing in The Guardian said, “If Dalcher wants to scare people into waking up, she would do better to send them back to the history books, rather than forward into an overblown, hastily imagined future.”
Dystopian fiction is supposed to function by holding up a mirror to our world showing us our sins, the worst things about the way we’ve built our society highlighting our concurrent systemic problems. One of the ways they do this is through exaggeration, taking a trait we can easily recognize in our own communities to its logical extreme: The Handmaid’s Tale exaggerates the rhetoric of the Reagan-era “moral majority” while Vox exaggerates the way women are taught not to speak up.
One theme of feminism that has never quit made sense to me , even on a gut level, is that of the oppressive patriarchy. I agree that men are powerful and are more often in positions of leadership making the decisions for the group. However, it has been my experience and I have been witness to far more examples of this leadership being one of protection and concern for the well-being of others than one that oppresses and seeks to harm women. But what concerns me the most about Vox, and it should concern you as well, is it’s remarkably conformist outlook. The main character Jean openly admires her lover Lorenzo’s aggression and dislikes her husband’s more mild-mannered demeanor. At one point she celebrates the idea that “Lorenzo would beat the living shit out of someone” who attacked her. But surely these are the very same patriarchal values a novel decrying the patriarchy should eschew. Women aren’t allowed to speak but, even in this imaginative flight of fancy, men are still required to speak with their fists. It’s a striking reminder of the limited roles we’re all still required to play.
I was instructed all throughout grade school, as every child is, that silence is golden. But now, as an adult, I know that maxim only applies in libraries and reading Vox has at least made me keenly aware of just how deep that conditioning goes. Even though I disliked the book and it’s themes immensely I did find myself wondering how often I choose to remain silent when perhaps I shouldn’t.