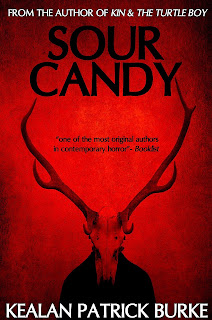 Sour Candy by Kealan Patrick Burke
My rating: 4 of 5 stars

We’ve all been there. Standing in the aisle of some big-chain box store. Trying to hurry and get the stuff we need so we can get out and on with our lives. There’s a hundred other places we’d rather be, and we’re already annoyed because it took way too long to find a parking place and there are too many people there whom, it would seem, are only there for the sole purpose of standing in our way, chit-chatting with a friend or acquaintance they happened to have ran into while shopping. Thats when the screaming starts. Some loudmouth kid is braying like a donkey because they didn’t get either a cookie or a toy they wanted, and their parents are either trying to negotiate with the little shit, or, worse, attempting to ignore them. Meanwhile, you’re standing there thinking, that it just isn’t possible that this kid isn’t some kind of demon from Hell. Well, you could be right.
Phil Pendleton is an unexceptional man, living a carefree life with his young son, Adam. No one who observes them however, has any idea that Phil has only known Adam for a short time, and this seemingly carefree life they are living is really a living Hell. After the two randomly meet at a store, Walmart of all places, Adam decides to make Phil his newest “parent,” using his terrible powers to completely rewrite Phil’s life so that everyone thinks he’s always had a son. Only Phil remembers the life he used to live and those memories are no comfort as he becomes a prisoner in his own home, a slave to this demonic child.
Suffice to say, this is an ominous and innovative story that plays on the fears associated with becoming a parent. The core premise is one of a man having to take charge of a child he never wanted, and having to unwillingly give up aspects of his personal life, which is a real-world relatable circumstance that offers a breadth of intriguing narrative paths, particularly when considering the child is a supernatural being, possibly even a malicious one.
Burke’s writing is visceral and during the final pages, you could have lit me on fire and I wouldn’t have noticed as Phil’s numb despondence acted like a contagion I struggled to keep out of my own mind. His descent into madness is rendered in unnerving terms and there is even a Lovecraftian pantheon of monsters, which helps to create a stomach-twisting ride through the depths of horror, breathing new life into an often-stagnant part of the genre.
By introducing the unfathomable into the everyday, Burke has managed to hit us all right where we live. Phil Pendleton was simply doing what we’ve all done before, making a quick run to the store and that, coupled with one kind gesture, was enough to ruin him. If this idea that we could all be living so close to an abyss doesn’t scare you, then I don’t know what will.