Dick Jokes, Beer, and the Agony of Youth 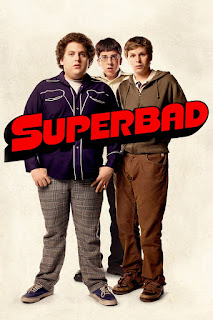 The saddest scene in movie history has to occur towards the end of Superbad, when Seth takes one last plaintive look back at the receding Evan, before stepping off the escalator and into an uncertain future, both beginning their separate lives.
In Ferris Bueller’s Day Off we find a similar moment when Matthew Broderick acknowledges that he and Cameron probably won’t stay in touch or remain friends, and that he and Sloane might not last too much longer either. For Seth and Evan, they may or they may not, but it’s not for the film to say. That’s life.
For Seth and Evan, the future is something that’s more than either of them can process, and so they don’t. As they slack through their waning days of high school, they discuss which porn sites they’ll subscribe to, gay-bash each other as only dumb young men are want to do, get drunk in their parents’ basements, and aggressively avoid any real conversations about how they’re going to separate colleges in a few months’ time. Neither wants to consider what this could mean for their friendship going forward, so instead Seth drools over Evan’s mom, and Evan mocks Seth’s Belushi-esque blustering about his untapped sexual prowess, and both of them attempt to negotiate their long-standing crushes, who could disappear out of the realm of possible consummation before long. All of this strife arrives while they’re still dealing with pointless classes run by checked-out teachers and obnoxious classmates, and most of all their incorrigibly dorky third wheel, Fogell.
Superbad is a movie about sexual desperation, but only for those who refuse to take it seriously. By the end it’s also a movie about platonic love between two friends and the unsettling truth that not all friendships make it. It deftly balances vulgarity and sincerity while also placing its protagonists in excessive situations, morphing into an authentic take on friendship that deals realistically with the fragile nature of male relationships coupled with the overarching awkwardness of high school.
Superbad served to inform an entire generation of young men that mutual affection didn’t necessarily have to be followed with “Homo!” as it usually was in real life. Instead we see Seth and Evan’s off-the-cuff homophobia give way to a genuine sort of love, even beyond the “bromance” half-posturing indicative of the time. They truly cared for each other, sincerely. The only other movie that even comes close to this same level of sentiment, would have to be Disney’s, The Fox and the Hound.
Copper and Tod have a wonderful time together, playing hide and seek, swimming, and exploring their world together. But the most telling scene in the movie occurs during an exchange between Big Mama and the young Tod, who happily announces to Big Mama that Copper is his best friend.
Young Tod: “And we'll keep on being friends forever. Right, Big Mama?”
Big Mama: “Darling, forever is a long, long time, and time has a way of changing things.” It sure as hell does.
Tod ended up being wrong about the strength of his friendship with Copper. Much like Seth. But why couldn’t they remain friends forever? Because the world wouldn’t allow them to be and because too much has happened between them and because life just doesn’t always have a happy ending.
Twelve years on, and Superbad is still important, and still hits me just as hard in spite of the fact that I find it funnier now than I ever did back in 2007. Like most of Apatow's work, the film does have a fable-like moral: our friendships are what maintain order and intimacy amidst the overwhelming chaos and fear that often invades our relationships. But the whole overarching point of the movie is that Seth and Evan are soulmates and that one of the hardest parts of growing up is knowing that it might not stay that way forever.
Superbad remains one of the only movies to ever honestly capture that one fleeting moment right before friendship turns to something else. Suggesting that the one great romance of our youth will always, and forever, be our best friend.