My Nostalgia has Goosebumps 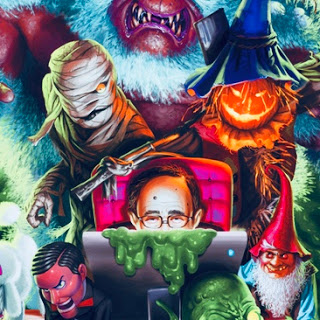 R.L. Stine first acquired literary fame with his popular Fear Street series in 1989 which quickly became one of the most bestselling series for young adults in publishing history, with more than 100 books published to date. But it wasn’t until around 1992 that he launched what would later become my all time favorite series of books as a kid, his Goosebumps series.
I myself was around ten years old when I first discovered the series, and right from the very first lines that I read I was captivated, chained to it’s pages until the book was finished. It was the thrill of the stories coupled with the amazing cover art by Tim Jacobus that kept me coming back to them over and over again.
During our weekly family trips to Walmart, one of the only places to purchase books in my hometown at the time, I would stand in the book/magazine aisle and browse the latest selections on offer, being sure to touch each one with inspired reverence. Which quickly became an almost religious experience for me followed almost always by the ritualistic “begging of the mother” in an attempt to bring them all home with me.
I would even take the books to school and sneak a peak whenever the teacher turned her back on the class. I also wanted to carry them with me everywhere I went and kept most of the books I had in a duffle bag by the door in case we had to flee the house in a hurry. I wouldn’t dare risk leaving them behind.
Now that I’m older I’ve often wondered just how Stine managed to have such a stunning effect on so many of his young readers, myself included, and why Goosebumps was so popular. The answer that I’ve come up with is that they were just fun. Being scared in a safe way is fun.
Children know, almost instinctively, that Stine’s stories couldn't possibly happen in real life and therefore whatever sense of fear that is instilled into them isn’t a fear based in reality.
Our relationship to fear, what makes us afraid, and how we deal with being afraid, is a necessary balancing act that needs to be self-calibrated over time. Being exposed to what scares us ends up acting in the same way that immunizations do, and I think it’s just as mandatory for children’s overall emotional and psychological health and well-being. And Stine’s books helps children accomplish this goal perfectly as it helps them to understand that fear is healthy and in turn that same fear actually manages to help keep children safe, as it gets them to actually begin to think about some of the consequences of their decisions.
To this day I can still remember the feeling of holding that first Stine book between my open palms, opening the book to a random page, burying my nose inside it, and inhaling long and deep. Yes, I am a book sniffer, and for me it has always been the look, as well as the smell, of those early Goosebumps books that still makes the memory I have of them a pleasant one.
Labels: Articles