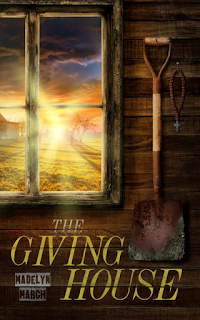 The Giving House by Madelyn March
My rating: 3 of 5 stars

As Harriet Jareck lies dying, cancer capriciously undulating it’s way through her dementia addled brain, she can't let go of a memory that has haunted her for most of her adult life. Her greatest fear is that she will die before she can share this memory and hopefully be forgiven for the transgression it contains. But her time is short and who will listen?
People, throughout time, have often wondered how to go about confessing their sins. Do they need to wait for an appointed time or go to a special place? Do they need to confess their sins to a particular person? Which really highlights James 5:16, as the pivotal text underscoring much of March’s narrative: "Confess your sins to one another ... that you may be healed."
However, I was never thoroughly convinced of just exactly what Harriet’s transgression sincerely was. She appeared to me to be mostly blameless. At worst she was simply someone who had refused to embrace the idea that forgiveness is one of giving up the possibility of a better past. But, perhaps she is guilty in a way that only the truly devout can be.
Many Christians live under a burden of guilt, living in the past instead of in the future, in their ‘New Life’ with Christ, never really believing that God has truly forgiven them. Which is what makes this story worthwhile. It tells us that letting go of an old attachment opens up the real possibility of a new one. Which would be sufficient enough, except that it always leaves a blank spot where the future lives, and we mostly fill such blank spots with fear. Fear of the unknown. Fear of failure. Fear of future loss and additional pain. Fear makes us cling to what we know, however bad it makes us feel. So Harriet wasn’t really looking for forgiveness. She was looking for a way to calm her fear. A fear of the unknown. A fear only the dying can know.
Although, I found this book to be undoubtedly the work of a writer who is still learning how to piece together a good story, the writing, nevertheless, and despite its short comings, did manage to draw me in. Still, the overall ideas and themes attempting to be expressed throughout the book were not completely explored as well as they should have been and the ending felt rushed and uneven. As a result the second half of the book was a huge let down for me. But in spite of what the reader might think, I did enjoy the narrative enough to finish the book. In the end however, I simply found myself wanting to love this story perhaps a little more than it deserves.