Book Review: Sauced up, Scarred and at Sleaze 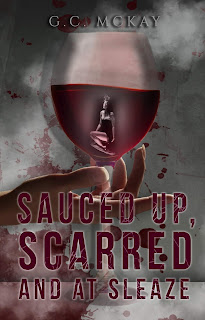 Sauced up, Scarred and at Sleaze by G.C. McKay
My rating: 4 of 5 stars

I think the first duty of any good story is to be transgressive. A good story should change the way you see the world. Fiction can do that, more so than nonfiction. Fiction allows you to get as close as you want to the actual truth of a thing before allowing you to then move away from it. So there’s power in fiction that in a way makes it superior to truth, because it’s the truth along with the artfulness and craft of story. If it's not the truth, it simply doesn't work.
So what then is Transgressive Fiction? Well, if you find yourself saying "damn, that's fucked up" three or more times while reading, there's a pretty good chance that the book you’re holding is a work of Transgressive Fiction. It’s also a genre of fiction that I happen to believe is actually more honest than all the rest, as it discerns that all desire is unsafe, that all fantasy is just trumped up style, and that all transgression is merely a mixture of violations of, not only form, but of personal risk.
Transgressive Fiction also focuses mainly on characters that feel confined by the norms and expectations of society and who break free from those confines in unusual or illicit ways. Because they are rebelling against the basic norms of society, protagonists of Transgressive Fiction may seem mentally ill, anti-social or nihilistic. Which is a great Wikipedia definition and all, but if you were to ask ten random people what Transgressive Fiction is you’ll likely be met with shrugs along with a bunch of disparate descriptions. But show them titles like Trainspotting, Fight Club, Lolita, Requiem for a Dream or American Psycho and you’ll get nods of recognition and statements like, “I loved that book” or, and more likely, considering this is America, and given our current literacy rates, “I loved that movie.”
However, I do think McKay would reject this label of nihilism being applied to his work. I think he’s really a “veiled optimist,” as Cioran would have put it. His works, at least with this book, can be mistakenly seen as nihilistic by less sophisticated readers, but that’s only because they seek to express ideas that others do not believe in.
Cioran, professing a lack of interest in conventional philosophy earlier in his youth, dismissed abstract speculation in favor of personal reflection and passionate lyricism. "I’ve invented nothing; I’ve simply been the secretary of my sensations", he would later say. I would say the same of McKay.
Sauced up, Scarred, and at Sleaze, is a book who’s structure indicates that a sublime marriage between existential dread and mundane horror can be quite an exquisite synthesis. And while these stories may not have much of a word count, they do pack a heavy dose of superb writing wrapped in a genuinely unsettling, and yet entertaining, group of stories that will serve to unsettle and provoke it’s readers in a very corporeal fashion, right from the very beginning. Which is exactly what you want good fiction to do.
The standout story in this collection, for me, turned out to be Bloodhound Lust. Not only did this story send shivers down my spine, but also a suppressed chuckle in my throat. It’s a remarkable story in a remarkable book, which I dare say, might just be the most original work of Transgressive Fiction you’ll read this year.
McKay’s style is both unique and innovative. He’s also unflinchingly fearless, which is something I really appreciate and admire in a writer. He is, without question, one of the best new writers that I’ve come across in sometime. In saying all this, I also want to make it very clear that, by the end of the book, I was left starved for more. I want more of Mckay’s entrancing prose that allows me to withdrawal into his emetic narratives. I want more vivifying and impregnable imagery.
I did however notice some clichés in his writing, but nothing too distracting or cloying. I also got the impression that he was yearning to explore some of his scenarios to their fullest extent, but because of the format, didn't really have the space to do so. But what this book may lack in exposition, due partially to arrangement, it more than makes up for with the creativity of each of the stories. As it stands, this collection serves as a solid starting place for McKay’s ever growing body of work.