Book Review: The Making of a Philosopher: My Journey Through Twentieth-Century Philosophy 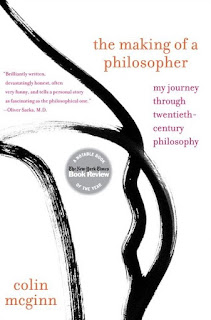 The Making of a Philosopher: My Journey Through Twentieth-Century Philosophy by Colin McGinn
My rating: 3 of 5 stars

My commencement into the world of philosophy, came by way of a book my brother once gave to me, leftover from one of his college freshman courses. A book by the philosopher James Rachels, The Elements of Moral Philosophy.
Rachels was an American philosopher who specialized in ethics and animal rights and who’s arguments persuaded me, for a time at least, to even adopt vegetarianism for myself.
As I pondered the questions Rachels asked of his readers, I became alive, I believe, intellectually, for the first time. I was absolutely on fire with philosophy from that point on. And I’ve read innumerable books dedicated to the subject since then. But I will always remember and cherish Rachels book as one of the first, and certainly among the few, books that have made a lifelong impact.
I first became aware of Colin Mcginn, however, back around 2004 when he was featured on the BBC documentary series, The Atheism Tapes with Jonathan Miller. Actually that’s also how I have been introduced to a number of great thinkers, through one documentary series or another.
In The Making of a Philosopher, Mcginn touches upon some of the more major strands of what is, I have heard referred to, rather crudely, as, "analytical philosophy," be it language, the meaning of meaning, the mind, the body (where one starts and the other finishes), the Subject, the Object, Phenomena, the Thing-in-Itself, primary and secondary properties, mathematics and logic, ethical judgments, and all that senselessness. Which makes this is a good read for the non-specialist interested in why a philosopher might want to become a philosopher and spend their years pondering, why there is something rather than nothing.
As McGinn makes it clear up front, this autobiography focuses on his intellectual life rather than his personal life. And as someone who once considered a career in academic philosophy themselves, I found this book to offer a fascinating insider's perspective, even if it mainly represents the perspective of one man. McGinn also has an enviable ability to summarize and explain even the most obtuse of ideas, Saul Kripke and Donald Davidson's work certainly falls under that category, making the book fascinating as well as interesting.
But I did find Mcginn’s tone to be a little off-putting at times; the "isn't it amazing! and me just an ordinary sort of chap!" inflections, ad nauseam, strike the ear as a bit self-satisfied and pompous. But, you shouldn’t mistake my meaning here, as Wittgenstein himself said, language can be tricky, especially when it comes to matters of tone and idiom. I did very much enjoy McGinn's book. But, with that said, and as my own working class Grandmother might have said, he does come across as "a bit full of himself."
The only other problem I had with the book, and it’s one other reviewers have had as well, is Mcginn’s strict avoidance of any personal information. So much of our thinking is influenced by our emotional life and so I think more details about Mcginn’s personal life would have added a much needed and important dimension. But I respect his decision to devote the book exclusively to his own particular evolution as a philosopher instead.
What I did find most striking about the book was Mcginn’s conclusion, fully discussed in some of his other books, that the human mind is not equipped to understand the fundamental issues of philosophy, such as the mind-body problem, the determinism-free will riddle and the nature of consciousness. As he puts it, “in my bones I felt that there was some deep-seated obstacle in our intellectual makeup that prevents us from discovering the missing clue…We are suffering from what I called “cognitive closure” with respect to the mind-body problem. Just as a dog cannot be expected to solve the problems about space and time and the speed of light that it took a brain like Einstein’s to solve, so maybe the human species cannot be expected to understand how the universe contains mind and matter in combination. Isn’t it really a preposterous overconfidence on our part to think that our species—so recent, so contingent, so limited in many ways—can nevertheless unlock every secret of the natural world?”
Essentially what Mcginn is saying, is that there are really two sorts of questions: problems and mysteries. Problems are those questions it is within our capacity to answer, whereas a mystery is a question that falls outside our cognitive space. The problem with McGinn’s theory, what’s been labeled mysterianism or new mysterianism, is that one can never know when it applies. “If there are things we are constitutionally incapable of understanding,” writes Daniel Dennett, “then where to draw the line will clearly be one of them, as this would seem to require our being able to stand on both sides of the problem. A paradox would be involved where we would know enough about the issue to say that we can never comprehend it.” Interestingly, however, the philosopher Thomas Nagel also reached a similar conclusion to Mcginn’s, in a 2012 book which stated that there is in fact something very obviously missing in our understanding of our own evolution.
The term “mysterianism” is also, actually, incredibly misleading: discussing inherent limits of the human mind is a legitimate and indeed much-needed concern and I think Mcginn, and others like him, add an important dimension to the emerging study of “ignorance” and pose serious question marks to the “Singularity” expectations, put forward by Kurzweil, of humanity constructing a super-intelligent AI.
Few philosophers today, however, can genuinely tell us anything really meaningful about the world anymore. And even though philosophy may very well be, as Hegel once said, “utterly useless and fruitless.” It is for this very reason, the sublimest of all pursuits, the most deserving of our attention, and the most worthy of our zeal. A somewhat Coleridegy assertion to be sure, with a rivulet of deep meaning in a meadow of words. But, nevertheless, quit astute.