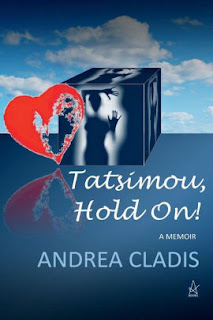 Tatsimou, Hold On!: A Memoir by Andrea Cladis
My rating: 4 of 5 stars

There are certain memoirs that are difficult to critically evaluate because they compel us to unearth some of our own difficulties, and so any discussion becomes necessarily a personal one. And while I don’t want to fall into the trap of using Cladis’s book to write about myself, I do suspect that every woman who reads the book, will recognize a little of themselves in it. For men who read the book, it will more than likely be a sort of travelogue, a descriptive, yet earnest, vade mecum.
Eating disorders are generally as much of a biochemical addiction as a psychological one. Rooted in familial dysfunctions, generational malaise and our national obsessions with feminine thinness. Which is really what makes Tatsimou, Hold On! such a gripping memoir, one that delivers a primal scream of a narrative sure to resonate even with those who possess a healthy disposition towards food and weight.
Cladis is far from shy in the story she tells and the full depravity of her disordered thinking is revealed here in full detail. Her account of how paralyzed those around her were as she began to deteriorate right in front of their eyes is also, I think, both accurate and well done. She even explains how food-related behaviors and routines come together to form the depressing and obsessional life of an anorexic. If you wish to have an insightful look into this world, this is it. And while I haven't experienced this same type of hell in the same way, I do understand some of what she describes, and it's not easy by any stretch of the imagination.
Cladis’s attempts at exploring the complexities of her illness do not spare her parents either, but neither are they demonized. “I can’t recall the day when I began resenting my parents,” She writes, “But there’s a good chance it was when they forced me to go to therapy sessions...” But through it all she did make an uncommonly even-handed effort in attempting to understand what role her parents did play in some of her own anxieties, and as her story unfolds she eventually acknowledges that there was in fact a genuine quality of love between them.
I am like a moth to the flame when it comes to taking an in-depth exploration into someone’s psyche. The more complex, the better. I love to learn how people think, the experiences that shape them, and how they maneuver through life’s obstacles and especially the obstacles within their own minds. I love to cut through the bullshit and the formalities and get right to the heart of a person. Tell me who you really are!
I savor the take-me-or-leave me relationship that develops between writer and reader, and how the writer’s innocence and vulnerabilities are the magnets that pull the reader in to the story, rather than the flowery words or intricate plot lines. I also like the trust that develops as the writer bares his or her soul to the reader, and how the reader is almost always able to find pieces of themselves in the writer. I love how reading a memoir reveals that when we peel back our layers of protection, which most of us spend our entire lives building up, we can see that we are not all that different from one another. We are all just trying to make sense of this thing called life. Some of us are just better at pretending that they actually know what they are doing than others.
Cladis ended up being her own worst enemy, as the voice inside her head pushed her to become thin and beautiful. To become perfect. In fact she talks a lot about perfection in the book. Which, when assessed clearly, is really an ideal that is based on the compulsive belief that if you proceed carefully enough, you won’t have to die. The truth is, however, that you will die anyway. And it is to Cladis’s credit, and to the readers profit, that she eventually manages to kill this golem that had laid waste to her teenage years. But as Roxane Gay writes in her memoir, Hunger, “In too many ways, the past is still with me. The past is written on my body. I carry it every single day. The past sometimes feels like it might kill me. It is a heavy burden.”
Which leads me to another, more definitive, reason as to why I am drawn to memoirs. As a writer, deep thinker, and a person of passion, I have my own story to tell. I have told some of my story in a few personal pieces that I’ve posted to this blog, and truth be told, the excavation process and exposing certain parts of myself that had not been exposed to many was both cathartic and excruciatingly terrifying. Birthing your story is not easy. It can be challenging enough just to have lived through it, but conveying it to others in a way for them to understand and empathize with requires attention not only to the craft of writing, but to your whole being.
I overheard a preacher say once that hope is a revolutionary patience; but I’d like to also add that, so is being a writer. And it is an old chestnut that great writing should give us empathy for others. But Cladis has given me something far rarer: empathy for myself. Tatsimou, Hold On!, is an unsparing, terrifying, razor-edged self-portrait that cuts right into the heart of one of the most paradoxical of psychological disorders. It’s stunning and unbelievable. A tortured-yet-compelling account of a life spent bingeing and starving. Not just for food, but for discipline, meaning, love, and even for life itself.