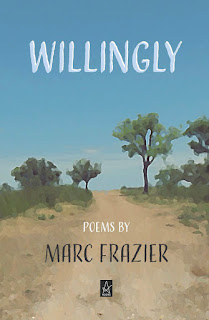 Willingly by Marc Frazier
My rating: 4 of 5 stars

As I sat near one of the main windows in Sycamore’s only public library, scribbling in the margins of my copy of Willingly, an undergraduate student sitting next to me asked if I was reading a collection of poetry. His friend, as it turned out, wanted the names of some poets she should read in English. The thought that anyone would be asking me to recommend a poet seemed ridiculous at the time, who the hell am I after all? But as our serendipitous symposium continued, it abruptly dawned on me that most of the poets that I have ever discovered, and have come to admire greatly, have actually been discovered in this same way. By an informal, chance encounter, with a stranger reading a book.
Most people unfortunately look at poetry as if its a cement barricade. They are intimidated by it's seeming impenetrability, or even bored by it. But we all begin our lives with a great love of poetry. It’s just that as we grow older that love can sometimes start to fade. Our language becomes more practical rather than fanciful, and we may even start to think of words not as amusing sounds we make but rather as tools we can put to some use. And while it’s true this practical side of language has great power, it also has its limits. Reading and writing poetry allow us to explore what lies beyond these limits, to remind ourselves that language is not just something we learn; it’s something we actively take part in creating.
Nevertheless, everyone still acknowledges that poetry is important. We just don’t know how or why it’s important. Which makes Willingly, more like a post-modern painting than anything else, one you cannot take your eyes off of for studying every detail. It is extreme and haunting and covers a wide spectrum of topics. The poems also adhere to a variety of different structures that vacillate between having straightforward meanings and others that require a deeper interpretation. But, for the most part, Frazier’s uncomplicated language makes the poems messages direct and easily accessible. Some of the more prevalent themes Frazier explores are family, childhood memories, and personal relationships, always with the reminder of the wonder and grace of existence that still, ever so blatantly, anchors us in the world, and times, in which we live.
In short, Willingly is an ideal anthology of miniature burning suns, and each poem ignites like a torch on the page allowing us to see the stunning basilica that we have been standing in all this time, but were not aware of simply because it appeared that we were standing in total darkness. It is, without question, an alternately thoughtful and whimsical collection of verse.
Poetry, however, does seem to be one of the only art forms where the number of people creating it is far greater than the number of people appreciating it. Which is our national shame. And unfortunately, for some, poetry will always be considered something outdated. Either too random, too issue-oriented, or too melodramatic. Most of us even believe that if we don't have the same interpretation of a poem as everyone else, then we must somehow be wrong, which is largely a failure with how poetry is taught. But it's not about right or wrong; it's about what you see in the poem. There is no code that can only be understood or deciphered by an elite cadre of academic gatekeepers.
Poetry may very well be a dying ember, but with Willingly, Frazier has fanned it’s flames. Even going so far as to kick off the lid on the gasoline canister, soaking the entire genre, sending it rising into a roaring, scorching, beautiful inferno. He is able to do this because he is a highly gifted and reflective poet. One more interested in questions than answers and his metaphors capture natural phenomena in enchanting ways. He is taking stock of a life lived, and is able to imbue it with an intense, almost perverse elegance. And it was only after I finished Frazier’s book, that I put it back upon my shelf, grabbed a bottle of bourbon from the fridge, threw back a drink, and whispered, "Goddamn.”