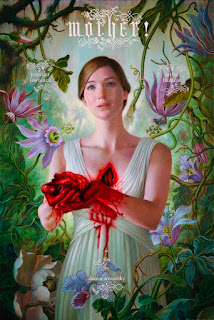 Directed by: Darren Aronofsky
My rating: 5 of 5 stars

Mother! tells the story of a nameless couple, played by Jennifer Lawrence and Javier Bardem, who live in a beautiful Victorian house in the middle of nowhere. Bardem is a poet, a creative genius who is unable to create, Lawrence is his overly dedicated lover. Their house was almost destroyed in a fire, some years ago, and Lawrence spends her days meticulously restoring it to its former grandeur, while Bardem struggles to write. Their tranquil existence is interrupted, however, by a stranger, a person known only as “Man.” Man, we learn, is a lifelong fan of Bardem, and is invited to stay in the house, to Lawrence’s unease. Soon he is joined by his wife, Woman, who is openly hostile to Lawrence, followed by their feuding sons, and then their extended family and friends. All of the strangers appear to dislike the subdued, patient Lawrence. Her home is her pride and joy, and her uninvited guests seem to delight in damaging it. Bardem, on the other hand, is absolutely adored by the strangers, and he adores them in return; he doesn’t care about Lawrence’s discomfort in the slightest.
The Washington Post has pointed out that, before settling on Mother! as a title, Aronofsky toyed with another marquee clue, giving his film the working name of Day Six—a nod to the day in the book of Genesis on which God created humanity and gave it dominion over the Earth. The Telegraph built on the Genesis parallels, adding the following context: “You see, God’s creations have a tendency to go wild, leading him to continuously wash away his work and start anew over and over until things run more smoothly. Bardem’s character is also obsessed with a mysterious crystal that he keeps in his office, which nobody is allowed to touch, and often takes advantage of Lawrence’s kindly nature. But she takes it in her stride, insisting that her husband is a very special sort of genius and needs time and space to create his next work.”
This is The Gospel According to Aronofsky, with the whole of the tale from Genesis to Armageddon retold as an abusive marriage between a self-involved, praise-addicted god and the world through and upon in which he creates.
But, the search for creative fulfillment from art or religion or politics is presented here as a selfish impulse, just as the writer’s love for his wife and child are selfish, a need for the validation and approval at a personal level that he also desperately craves in the public sphere. Lawrence doesn’t come off much better initially, passive and needy and looking to the “great man,” the artist, to fulfill her. It’s when she becomes pregnant, however, that the reality of who and what we are becomes clear to her. And it’s at this point of recognition, that, Lawrence, understandably, seeks to protect her new child from the “evils” swirling within her own household. She stays awake for days, refusing to hand the baby over to Bardem for fear he will share her child with his worshippers. When she falls asleep, Bardem does exactly that. And his worshippers swiftly snap the baby’s neck in their frenzied excitement, dismember him, and consume parts of his body, literally consuming the body and blood of Christ. Overcome with rage and refusing to listen to her husband, who pleads with her to forgive the worshippers, Lawrence takes it upon herself to destroy everything in the home she has created. And in a nod to Hindu religion which states that God created and destroyed the universe infinite times, the cycle begins again: ashes, crystal, a new home, a new Mother!
The film then is allegorical. And Aronofsky frames this perfect allegory, around a vision of Christianity that identifies God as a compelling but ultimately neglectful and abusive husband and father. But, at its core, Mother! is really a film about the male ego, the female instinct, and the most horrifying thing in the world: people who want more from you than you can possibly give. Making this film one of the most haunting pieces of cinema in recent memory.
Labels: Movie Reviews