Movie Review: The Killing of a Sacred Deer 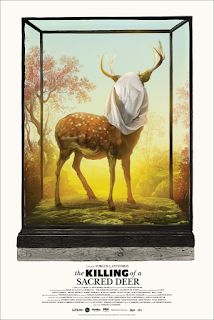 Directed by: Yorgos Lanthimos
My rating: 4 of 5 stars

The ancient Greeks tell the best stories. And tales such as Homer’s The Iliad have been recycled time and again, its themes ever-resonant even centuries later. Euripides’s Iphigenia at Aulis is another such timeless story, similar to the biblical tale of Abraham and Issac in its exploration of faith and sacrifice. It tells the story of the Greek king Agamemnon who accidentally kills a sacred deer that belonged to Artemis, goddess of childbirth. And because old-school Greek storytellers were all about the eye-for-an-eye style of justice, Artemis demands that Agamemnon sacrifice his daughter as penance. Which serves as the skeletal plot for Yorgos Lanthimos’s 2017 film, The Killing of a Sacred Deer. It’s a de facto reimagining of Iphigenia, in all its futility and absence of moral checkpoints.
Dr. Steven Murphy, Colin Farrell, is a heart surgeon who, by his own fault, has accidentally killed a patient. Years later, he’s visited by Martin, Barry Keoghan, the son of the deceased, who dishes out the doctor’s punishment: either he kill his daughter, Raffey Cassidy, son, Sunny Suljic, or wife, Nicole Kidman, or all three will lose the ability to walk, stop eating, start bleeding out of their eyes, and stop living—in that order.
For readers who’ve yet to have the pleasure, Lanthimos is a Greek director, now based in London, who specializes in venomously funny, bourgeois-baiting absurdism, think Chris Morris by way of Luis Buñuel, or Michael Haneke with a better joke book. Lanthimos has long been intrigued by the comedic power of the uncanny and its close relationship with dread. And in The Killing of a Sacred Deer, he keeps both sensations in constant flux.
The film is chilling in its directness: less a character study than the ballad of a coward who has to face consequences. It’s a film about what happens when you have to face a punishment that you don’t want to admit you’ve earned. Making the movie’s subject become, almost by default, the bankruptcy of upper-middle-class mores. Through all of it, Dr. Murphy manages to keep his reputation intact simply because of the hospital’s status system. Even working friendships are transactional. When Anna asks Matthew to tell her the real story behind the death of Martin’s father, the anesthesiologist demands a hand job first. The families home life revolves around mealtime rituals and household tasks and extracurricular accomplishments, such as Kim’s singing. It’s meant to be poignant and sardonic when Kim begs for her life by vowing never to forget her assigned chores. But the scene is just brutal. Lanthimos is working in a deeply metaphorical register, using an impossible situation to illuminate relatable human fears.
It’s not even necessarily that the characters are good or bad, but the warped playing field that enables devastation and good fortune to be visited upon innocents and perpetrators alike. But if further meaning could be distilled from the film, it may in fact come from the tension generated when the forces of mobility come into conflict with the forces of immobility. Nevertheless, the end result is a mesmerizing thriller that asks questions with no good answers and traps us within its terrifying and bizarre situation with little hope for a happy ending.
In an interview for the film, Farrell, summed it up rather severely when he said, “At the story’s core lies this very black and insidious sickness—a kind of carcinogen or poison that courses through the film.” Adding, “We don’t get an answer to what the poison is.”
That an ancient myth could be used to root both a family drama and an explosive exposition of body horror in the modern American experience signifies a director that is entering the master-stage of his craft. Unruly tensions abound across multiple levels, simple and complex, and it just might be that unique film that has no answers; as with the catharsis that comes at the end of great tragedy. It’s undoubtedly one of the decade’s opaquest films.
Labels: Movie Reviews